Capitalism as an economic system is a failure – JVP 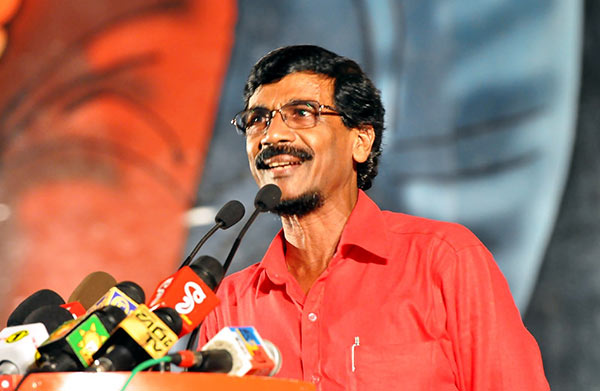 The JVP says the COVID-19 pandemic has proven that capitalism as an economic system is a complete failure.

Speaking at Labour Day celebrations held today, Chief Secretary of the JVP Tilvin Silva while expressing his views on coronavirus mitigation efforts said leaders have emerged with no vision in a capitalist system.

He said the President pledged to reduce the price of a canned fish and a kilogram of dhal, adding that a month later prices have risen.

He further drew attention to the prediction by the Minister of Health that the coronavirus epidemic in the country would be mitigated by the 19th of April, reiterating calls for Minister Pavithra Wanniarachchi to resign in light of such irresponsible comments.

The JVP Chief Secretary also noted the issue with plunging fuel prices in the global market, adding that petrol and diesel prices in Sri Lanka were not reduced, citing some Ministers as saying that if prices were reduced the people would begin to loiter and travel unnecessarily.

Tilvin Silva meanwhile charged that military personnel contracted COVID-19 due to the government’s carelessness, adding that Army and Navy personnel were not provided necessary protective equipment and directives to effectively and safely engage in duties.

He charged that this resulted in dedicated forces personnel contracting the virus, adding it was also the responsibility of the government that personnel who were granted leave returned to their homes carrying the virus.

Silva stressed measures should have been taken to test forces personnel or prevent them from leaving.

He claimed that as a result people began to mistrust Navy personnel fearing they may be carrying the virus.

Home » Capitalism as an economic system is a failure – JVP