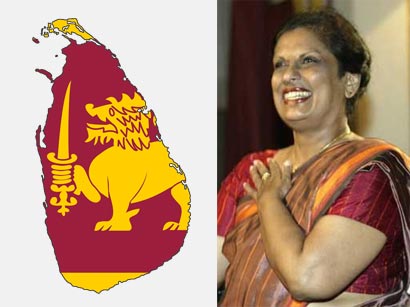 In an interview with a Press Trust of India correspondent in New Delhi she said there must have been “justifiable reasons” for India’s voting at the council meeting.

The former President .who has fell out with the current incumbent of the office in Colombo said India’s move in Geneva was not a “let down” and she felt “justifiable reasons” helped India take the decision.

The 66 year old Ms. Kumaratunga,  who ruled the island nation for 11 years from 1994, also charged  the Mahinda Rajapaksa government of not fulfilling the promises made to India and other “friendly countries” with regard to addressing the political grievances of minority Tamils.

Herself a victim of the bloodshed unleashed by the LTTE for nearly three decades and having survived an assassination bid with serious injuries, the former leader of the now ruling Sri Lanka Freedom Party feels the vote will not have any impact on India-Sri Lanka relations.

“I don’t think it was a matter of letting down. India has supported us for a long time, not only this government, but many governments of Sri Lanka. It has been very supportive,” she told PTI in the interview during a private visit to India.

Ms. Kumaratunga, who fell out with President Rajapaksa during the 2010 presidential polls, was asked about the generally prevailing Sri Lankan view that the Indian vote was a let-down.

“India had voted in favour of the U.S.-sponsored resolution at the United Nations Human Rights Council on May 23 that censured Sri Lanka for alleged human rights violations during the war with the LTTE.

“There has been criticism in Sri Lanka over the Indian vote with Foreign Minister G.L. Peiris saying that domestic compulsions forced its hand while Power Minister Champika Ranawaka has been more vocal raking up other issues against New Delhi.

“Ms. Kumaratunga said: “India [even] supported the Government of Sri Lanka in another U.N. resolution in Geneva two years ago. So, for India having changed its mind this time, there may have been some justifiable reasons. India has been asking the Government of Sri Lanka to give a political solution.” Asked whether non-fulfilling of promises by Sri Lanka might have forced India to vote against it, Ms. Kumaratunga said: “It could have. India also has its own domestic compulsions like every other country.”

“This is the first public comment by Ms. Kumaratunga on India’s vote.

“She acknowledged that India had supported Sri Lanka under “difficult circumstances” and provided aid to the country for several years.

“The former President also said the Sri Lankan government should see the end of the LTTE as a “window of opportunity” and address the political solution that would satisfy minority Tamils.

“India and many others have been [telling Sri Lanka to] give a political settlement to Tamil people and the government has publicly promised India. But they don’t seem to have kept those promises,” she said.