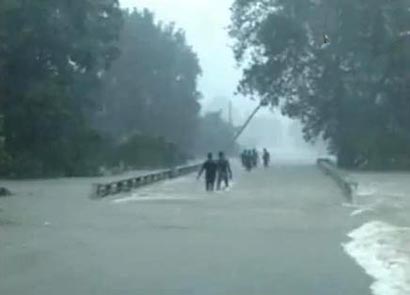 Four thousand nine hundred and seventeen persons from 1,219 families have been affected by the extreme weather prevailing in the country.

The Disaster Management Centre stated that 18 temporary shelters have been set up to house 830 families that have been displaced.

These are visuals of the flooding in Polonnaruwa, Aralaganwila and Pimburaththewa following torrential rain in the area.

Our correspondents stated that boats are also being used to rescue some of the stranded.
Meanwhile the main Polonnaruwa – Batticaloa road has gone under water at several places.

Our correspondents stated that the Ampara – Kandy road was also under water at several places.

Due to the disruption to public transport as a result of flooding, the army has been called in to provide transport to the people.

Meanwhile, the floods affecting the Kandy – Jaffna A9 route at several places has begun receding.
Our correspondents stated that earth slips have been reported from Ambatenna and Akurana, obstructing the road.

However, the road has been cleared and there is no obstruction to traffic.

Meanwhile, the 18th bend on the Kandy – Mahiyanganaya road has been temporarily closed for traffic.

Our correspondent in the area stated that the reason for this is an earth slip that has occurred in the area, obstructing the road.

Traffic on the Colombo – Moneragala road has also been obstructed due to the Kumbukkan oya overflowing and flooding some sections of the road.

Meanwhile several areas in Ambalantota, Maley Colony and Puhulyaya were inundated as a result of the sluice gates of the Uda walawe reservoir being opened.

This had affected traffic on the Ambalantota Ridigama road, which has been inundated at several places.

The Ambalantota Rice Research Institute has also been affected by flooding.

Meanwhile the Ambalantota Police station has also gone under water.

Our correspondents in the area stated that the Suriyawewa Viharagala – Mahagalewa road has also gone under water.

Following the torrential rain experienced across the country, many tanks and reservoirs have filled up, resulting in their sluice gates being opened.

This is the manner in which the sluice gates of the Kandalama tank in Dambulla were opened Monday morning.

As a result of this 3918 cubic feet of water per second is being released in to the Kalawewa.

Meanwhile, four sluice gates of the Parakrama Samudra in Polonnaruwa have also been opened.

Over at the Rajangana Tank, eight of its sluice gates have been opened to release excess water while four gates of the Kalawewa have also been opened.