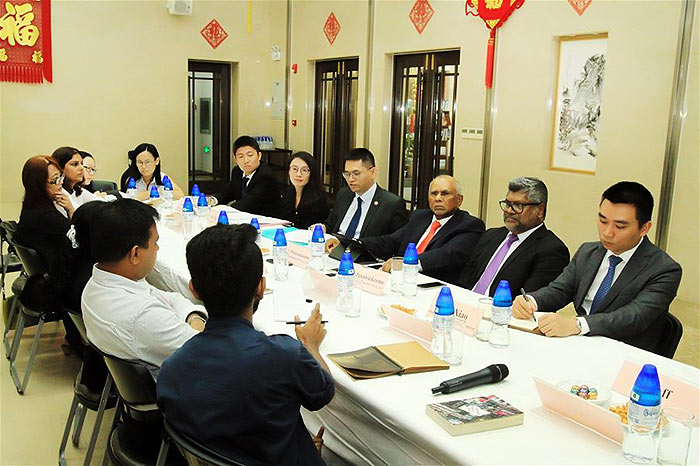 China is full of confidence in the future development of Sri Lanka and dismisses allegations that the island country faces a “debt trap,” the Chinese Embassy in Colombo said here Thursday.

Embassy Spokesperson Luo Chong, along with officials from China Harbour Engineering Company (CHEC) and China Merchants Port Holdings, briefed the media in response to allegations that appeared in Western media reports, which stated that China’s acquisition of the Hambantota port from Sri Lanka highlights its “debt trap” and ambitious use of loans to gain influence around the world.

Luo said the so-called “debt trap” was a false proposition created by Western media with a direct attempt to obstruct the joint development of China and other developing countries, including Sri Lanka.

He added that China remained a very important development partner of Sri Lanka and China had provided great support, including financial assistance, to Sri Lanka for its post-war reconstruction and national development at crucial times.

Luo further said the Chinese projects in Sri Lanka adhere to the golden rules of “extensive consultation, joint contribution and shared benefits” and most of the major projects were related to the national economy and people’s livelihoods.

These projects were based on the urgent needs of the economic and social development of Sri Lanka and proposed after sufficient feasibility studies, Luo noted.

“China is pleased to see that the major projects and technical talents built and trained with the support of the Chinese side have become valuable assets of the Sri Lankan nation and people, and will provide a continuous momentum for the all-round development of the future. China is full of confidence in the future development of Sri Lanka,” Luo said.

An Xin, joint managing director of CHEC’s Sri Lanka branch, said the construction of the Hambantota port was an important task based on an agreement between the Sri Lankan and Chinese governments, and was implemented under a transparent model.

“The Hambantota Port was built for the Sri Lankan government and its people. We wish to jointly safeguard Sri Lanka’s investor-friendly environment. The relevant media report has distorted the facts and provided a false opinion,” An said.

Tissa Wickramasinghe, chief operating officer of Hambantota International Port Group, said that since an agreement was signed between Sri Lanka and China last year on the management of the port, the roll-on and roll-off business of the port in the first half of this year reached 106,988 units, more than the full year’s business volume of 2017.

In July 2017, China Merchants Port Holdings and state-owned Sri Lanka Ports Authority signed an agreement to manage and run the operations of the Hambantota port.

Following the signing, the Hambantota International Port Group was set up as a joint venture company formed by the Sri Lankan government and China Merchants Port Holdings.