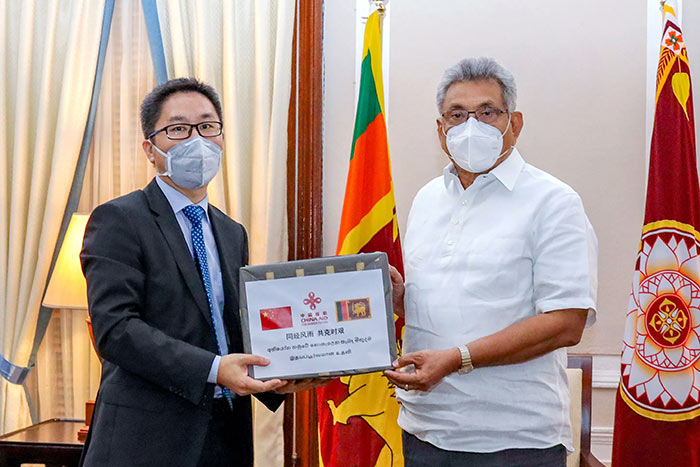 “Sri Lanka is a special friend of China. We have long standing and cordial relations between the two countries. When we faced COVID-19 disaster recently, Sri Lanka stood with us. China is willing to return that goodwill in the form of fullest cooperation to revive Sri Lanka’s economy in the post-COVID-19 period”, the Acting Ambassador and  Chargé d’affaires of the Chinese Embassy in Colombo Hu Wei said to President Gotabaya Rajapaksa at the Presidential Secretariat yesterday (29).

Exchanging pleasantries with President Rajapaka, the Acting Ambassador who paid a courtesy call on the President quoting a Chinese saying  said that “true friendship is to stick together in sorrow and happiness”. He said his country and the people are grateful to Sri Lanka for being a friend in both good and bad times. Mr. Wei emphasized that China expects to assist Sri Lanka to overcome its future challenges. Sri Lanka will receive help not only from the Central Government of China but also from the country’s leading companies and banks to rebuild its economy in the post-COVID-19 period.

Recalling the assistance extended by China to Sri Lanka from the time of Rubber-Rice Pact President Rajapaksa said China stood with Sri Lanka during the armed conflict and the post-conflict development drive.

COVID-19 pandemic has adversely impacted not only the global economy but also Sri Lanka, President Rajapaksa noted. The sharp drop in foreign exchange earnings has posed an enormous challenge before the country, President added.

Due to the nosedive plunge of global economy we have lost the income generated by apparel industry and tourism . It might take a considerable amount of time for the global economy to recover. As such, Sri Lanka has planned to adopt  a new development model to create a production economy said the President while adding that he hopes to receive the positive responses and goodwill of friendly nations to make it a success.

“Our expectation is not just limited to receiving loans and financial grants. One of our prime objectives is to attract foreign investments which can positively contribute to the increase in production. There are ample opportunities for foreign investments in various sectors including agriculture based production and in the construction field.  I invite China and other countries to make use of those opportunities”, President said..

Replying to a query by the Acting Ambassador on the progress of current COVID-19 prevention activities President Rajapaksa said the spread of the virus is under control in general. President explained the reasons for the sudden spike in infections during the last few days and said remedial steps have been taken immediately.

“Mr. President, we are with you”, the Acting Chinese Ambassador said concluding  the friendly discussion.

Secretary to the President P. B. Jayasundera and the Head of the Political Office of the Chinese Embassy in Sri Lanka Luo were also present.