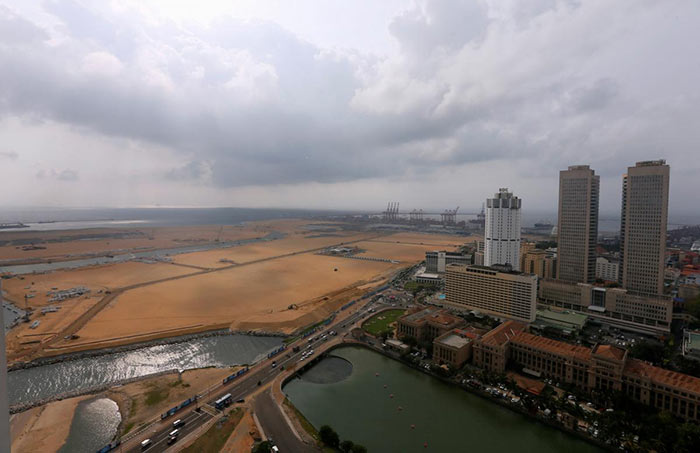 Talks between China and Sri Lanka for a free trade agreement have hit major hurdles, mainly because Beijing will not agree to Colombo’s demand for a review of the deal after 10 years, Sri Lanka’s top negotiator said.

China has invested billions of dollars building ports and roads and power stations in the Indian Ocean island nation just off the southern toe of India as part of its Belt and Road Initiative to increase its trade and other connections across Asia and beyond.

But concerns have grown in recent months that such investments can drive the country of 21 million people deeper into debt and undermine its sovereignty, prompting greater scrutiny of deals with China.

China’s exports to Sri Lanka dwarf the trade that goes in the other direction, leaving Colombo with a big deficit with Beijing.

Sri Lanka’s chief trade negotiator K.J. Weerasinghe said this week that Colombo was insisting on a right to review the free trade pact after ten years, but China was not ready to agree that.

“The talks have come to a standstill. China wants to remove the review clause,” Weerasinghe told Reuters. Beijing was opposed to such an option because it wanted longer-term stability, he said.

China’s commerce ministry did not respond to Reuters requests for comment.

The review clause that Sri Lanka wants would allow it to change some of the deal terms if they were hurting the island nation’s local businesses.

Weerasinghe said another point of contention was that China wanted zero tariffs on 90 percent of goods the two countries sold to each other as soon as an agreement is signed while Colombo would rather it started with zero tariffs on only half of the products concerned and expanded gradually over 20 years.

China has been pushing for free trade pacts with countries in the region and last year sealed an agreement with the Maldives that drew criticism from opposition political groups in the tropical islands’ nation. They said it had been rushed through parliament with less than an hour of debate.

Sri Lanka has previously said it wanted more time to negotiate the free trade deal with China as it is concerned about the economic impact of a rushed deal on its economy.

Sri Lanka imported $4.2 billion worth of Chinese goods in 2016, mostly raw materials for garments, machines and electronics, metals, transport equipment and chemicals. Its exports to the world’s second largest economy were just $211 million the same year, which included textiles, tea and vegetables, footwear and rubber.

The 2017 figures for China trade have still not been released by the Sri Lankan authorities.

The trade deficit with China accounted for nearly half of the nation’s total deficit in 2016, adding pressure on the country’s current account deficit, central bank data showed.

Sri Lanka’s foreign debt rose nearly 17 percent to 4.72 trillion rupees ($30 billion) last year, a fifth of that coming from loans from China to finance the massive construction program across the island.

Colombo is separately negotiating a trade pact with India, but that is also moving slowly because Sri Lankan businesses fear they will face competition from a flood of cheap goods made by Indian firms.