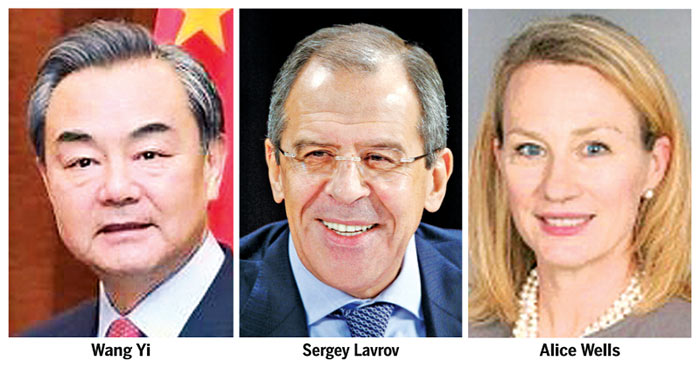 China’s Foreign Minister Wang Yi and Minister of Foreign Affairs of the Russian Federation, Sergey Lavrov and the US Principal Deputy Assistant Secretary of State for South and Central Asian Affairs Alice Wells will arrive in Colombo today on official visits.

Chinese Foreign Minister and State Councilor Wang Yi is scheduled to meet a number of senior leaders of the government including his Sri Lankan counterpart Dinesh Gunawardena at the Foreign Relations Ministry.

Foreign Minister Lavrov’s visit to the country,the first Russian to visit Sri Lanka since 2009 will renew and revitalize the longstanding bilateral relations between the two countries.Minister Lavrov will meet with President Gotabaya Rajapaksa and Prime Minister Mahinda Rajapaksa during his stay in Colombo, a communiqué issued by the Sri Lankan Foreign Affairs Ministry said.

Both the Chinese and Russian Foreign Ministers will meet Minister Gunewardene for discussions on Tuesday.Meanwhile, the Principal Deputy Assistant Secretary of State for South and Central Asian Affairs Alice Wells was also scheduled to arrive in Sri Lanka in the early hours of today on a two day official visit.

She will meet with senior government officials and members of civil society to discuss a range of bilateral and regional issues, including shared interests in a free and open Indo-Pacific region that fosters prosperity, democracy, justice, and human rights, a communiqué by the US embassy said.