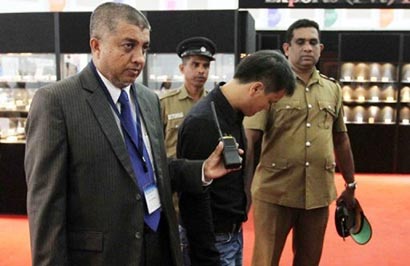 Chow Cheng, 32, is believed to have swallowed the diamond as he inspected it at the exhibition, attended by buyers from China, Hong Kong, Thailand, India and Europe, police said.

“His intention was to steal it,” Police Spokesman Ajith Rohana told Reuters. “The x-ray shows the diamond is in his throat.”

Suresh Christopher Wijekoon, owner of the exhibition stall, said Chow had tried to switch the original diamond with a synthetic one.

“He realized that I noticed it. Then he immediately swallowed it,” Wijekoon told Reuters.

The Indian Ocean island is famed for its blue sapphires, diamonds and a jewelry industry that accounted for $532 million of its export revenue in 2011.