COUNCIL KEEPS ITS “PRAYER”IN BRITAIN BUT DROPS “GOD” FROM IT 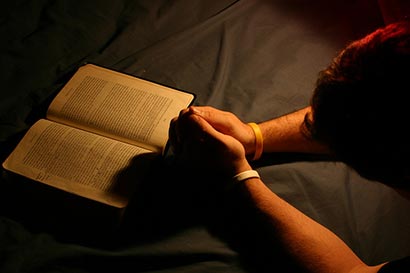 In Britain, an old bastion of Christian heritage there had been a widely accepted practice of starting public meetings by saying prayers until secularist campaigners protested  sometimes even by challenging the authorities in courts of law. Eventually some local government bodies dropped the practice altogether.

But when three councilors in Gloucestershire,  who are agnostic and atheist, staged a protest against the historic practice of standing up for a brief prayer before their meetings get under way remained seated the chairman decided to do something to retain council unity.

He  hit upon an “an ingenious solution”- the prayer would still be said – but with all references  to God removed. It no longer sounds like a prayer-asking something from above but a Buddhist meditation.

“So rather than asking “may He give us wisdom to carry out our duties …”, the chairman now states “may we find the wisdom …” – and the “prayer” still ends with the chairman leading other members in saying “amen”.

Reporting the interesting change the Sunday Telegraph wrote: “The authority is one of dozens across Britain which have recently scrapped or significantly altered their custom of saying prayers at the start of meetings under pressure from secular campaigners, who argue the practice breaches their human rights and excludes non-believers and people from other faiths.

A survey by The Sunday Telegraph has found that 40 councils have recently decided to drop, or “water down” the practice of saying prayers, with more considering doing so. By contrast, just 21 authorities said they planned to continue their arrangement of “formal” prayers without any changes. Other councils not making changes already hold “informal” prayers before meetings have officially started.

Some of the councils making changes have opted to remove prayers from their meetings’ agenda and instead hold an informal session up to fifteen minutes before the meetings start. Some, such as Hounslow, have scrapped prayers altogether, while others have replaced them with a “moment of reflection”. In Cheltenham, the council chaplain, who previously started the meeting with a prayer, now leads members in a silence of up to two minutes.

The finding represents a blow to Eric Pickles, the Communities Secretary, who acted to shore up prayers in February when a High Court judge ruled that Bideford Town Council, in Devon, was breaking the law by allowing prayers to be said.

Mr Justice Ouseley ruled the Bideford council’s prayers were not lawful under section 111 of the Local Government Act 1972. However, he said prayers could be said as long as councillors were not formally summoned to attend. The action had been brought by the National Secular Society (NSS) after atheist councillor Clive Bone complained.

The judgment led to an outcry among MPs and believers, who described it as an assault on Britain’s Christian heritage.

Within days of the ruling Mr Pickles granted new powers to councils “effectively reversing” the “illiberal ruling”, by giving authorities a “general power of competence”, which allows them to continue saying prayers without any changes, a practice dating back to at least Elizabethan times – but today’s finding suggests many have ignored his move.

The compromise reached by Gloucestershire county council is the most unusual step taken.

Brian Thornton, the Conservative council chairman, said he took the decision after he noticed that Sarah Lunnon, a Green councillor and Michael Collins and Simon Wheeler, both Liberal Democrats, were not standing for the prayers.

He acknowledged that it had upset a larger group of the 63 strong council who were now strongly opposed to the non-religious prayer.

“The prayer used to be the only moment when there is unity amongst all the members. I felt it was unfortunate that the unity was being broken and wanted to restore it,” he said.
“I am very happy with it. There is now unity. I kept the words, but there is no longer a reference to calling for God’s help. It does the trick without being related to God.

“The majority now seem happy with it, even if there is a group of around eight or nine who regret it and feel strongly that the proper prayer should be maintained. In this case, I don’t have to act in a democratic manner. I am a dictator in the way I control how the meeting is conducted.”

Sarah Lunnon said: “The compromise works for most people. People are no longer being asked to profess to a belief that they don’t hold. We may have a Judeo-Christian heritage, but the separation of Church and state is very important.”

But Pamela Tracey, a Conservative councillor opposed to the change, said: “We need to keep our traditions. We are getting rid of all of them and need to stop. Everyone still stands and says “amen” anyway.”

The Gloucestershire county council prayer is thought to date back to 1974, following a reorganisation of local government, but it is believed the tradition could have started far earlier. It was briefly stopped in 1999 by a former Labour group leader, but reinstated following an outcry.

Rev Ross Moughtin, vicar of Christ Church Aughton, near Ormskirk, is a former chaplain to West Lancashire council, where he led prayers to start meetings. The council still holds prayers, but has removed them from the minutes of its meetings.

He said he was happy with the new arrangement, but found the national situation, with prayers under attack, “sad”.

“The church is very much part of community life here and council prayers are part of that,” he said. “The national picture is sad. I would support prayers in council meetings. It helps people to recognise that council meetings are more than simply business meetings – that they have a spiritual dimension.”

Of the Gloucestershire compromise, he said: “If you are praying, you have to be clear who you are praying to. That doesn’t sound like the case here.”

“Let us pray for God’s blessing on all those who serve the people of Gloucestershire, and especially on the work of this county council.

“May He give us wisdom to carry out our duties; the humanity to listen to those we represent; the courage to do what is right; and the generosity to treat each other with respect. Through Jesus Christ our Lord. Amen.”

“May we find the wisdom to carry out our duties, the humanity to listen to all, the courage to do what is right and the generosity to treat each other with respect. Amen”