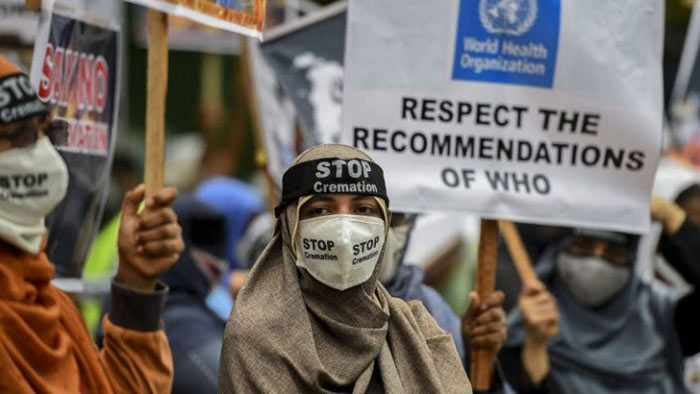 A remote island has been chosen by Sri Lanka’s government for the burial of COVID-19 victims from the minority Muslim and Christian communities.

The government previously forced minorities to cremate their dead in line with the practice of the majority Buddhists. It claimed burials would contaminate ground water.

But the government backed down last week in the face of vehement criticism from rights groups.

Iranathivu island in the Gulf of Mannar is the designated site for burials.

It lies some 300km (186 miles) away from the capital, Colombo, and was chosen, the government says, because it is thinly populated.

Muslims were angered by the ban, introduced last April, and said there was no scientific basis to it. Muslims make up nearly 10% of the population.

Government spokesman Keheliya Rambukwella said a plot of land had been set aside on the island, according to the Colombo Gazette.

The World Health Organization has provided extensive guidance on how the bodies of those who have died from Covid should be handled safely, but points out there is no scientific evidence to suggest cremation should be used to prevent infection.

“There is a common assumption that people who died of a communicable disease should be cremated to prevent spread of that disease; however, there is a lack of evidence to support this. Cremation is a matter of cultural choice and available resources.”

The UN High Commissioner for Human Rights has said the policy on cremations failed to respect the religious feelings of the victims and their family members, especially Muslims, Catholics and some Buddhists.

The forcible cremation of a 20-day-old Muslim baby intensified criticism of the policy.