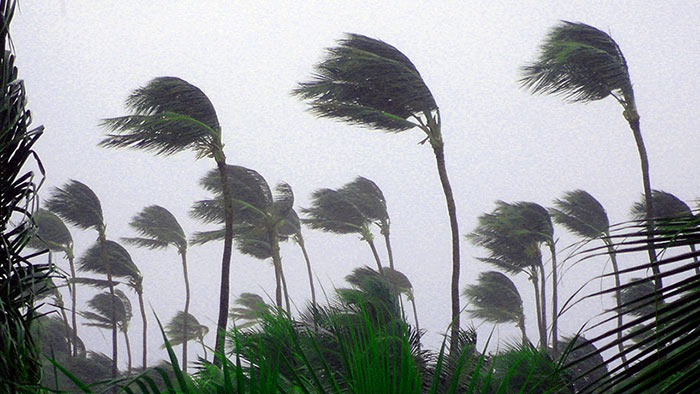 The cyclonic storm ‘Burevi’ very likely to cross Sri Lanka and rainy, windy conditions are expected to enhance considerably over the island owing to this development, the Department of Meteorology says.

The system is very likely to move west and north-westwards and cross eastern coast of Sri Lanka between Batticaloa and Point-Pedro, close to Trincomalee this evening or tonight.

This cyclonic storm, with a wind speed of 75-85 kmph gusting up to 95 kmph, is very likely to move nearly westwards thereafter, emerge into Gulf of Mannar.

Intermittent showers or thundershowers will occur in the Eastern, Northern, Northern-central, North-western, Central and Sabaragamuwa provinces.

Very heavy rainfall above 200mm can be expected at some places, the Met. Department warned.

Showers or thundershowers at times will occur elsewhere. Heavy rainfall above 100mm can be expected at some places.

The general public is urged to be vigilant regarding impending extreme weather situation.

Due to the aforementioned system, intermittent showers or thundershowers, strong or very strong gusty winds and rough or very rough seas can be expected in the sea areas in between 05N-12N, 79E-90E during next few days, the Met. Department said further.

Naval and fishing communities have been advised not to venture into the deep and shallow-sea areas over the island until further notice.

They are also requested to be attentive about future bulletins issued by the Met. Department over the next few days.

Intermittent showers or thundershowers will occur in the deep and shallow sea areas extending from   Mannar to Pottuvil via Kankesanturai, Trincomalee and Batticaloa. Very heavy showers can be expected some places in the above sea areas. Showers will occur at times elsewhere.

Winds will be north-easterly to north-westerly in the sea areas extending from Galle to Batticaloa via Manna and Trincomalee, wind speed will be (50-60) kmph and wind speed can increase up to (80-95) kmph at times over these sea areas.

Winds will be south-easterly to south-westerly in the other sea areas around the island and the wind speed will be (40-50) kmph and can increase up to (60-70) kmph at times.

There is a possibility that nearshore sea areas off the coast extending from Kankesanturai to Pottuvil via Trincomalee and Batticaloa may experience surges due to the effect of swell waves, having (2.0-3.0) m height.