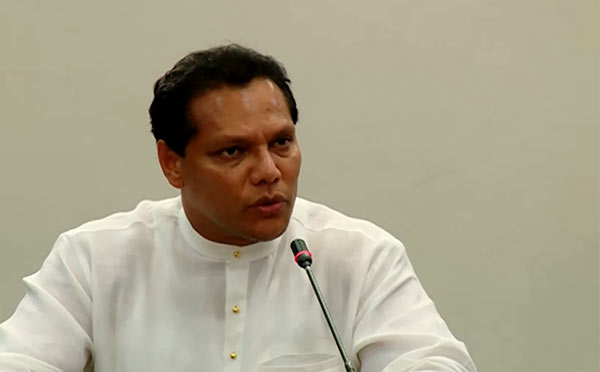 SLFP General Secretary Dayasiri Jayasekera, MP, yesterday, requested the Parliamentary Select Committee (PSC) probing the Easter Sunday carnage to investigate and find out the names of foreigners and local politicians who had stayed at Hotel Taj Samudra on April 21 as that would lead them to the persons behind the attack.

Testifying before the PSC, MP Jayasekera said that if the investigators went through the list of guests who stayed at Taj on the Easter Sunday morning, it would be easy for them to get a clear picture of the foreign powers and forces that orchestrated the attacks.

MP Jayasekera said that an investigation into the guest list of Hotel Taj could lead the probe in the right direction.

“All 225 MPs are accused of being privy to the warnings of the attacks. That is not so. For example, my security officers did not warn me. Similarly, not all 225 MPs were aware of them.

“This committee should pay attention to why and how only one five-star hotel was spared by the Easter Sunday attackers. It is said to have been spared because there were some powerful foreigners and local politicians there at that time. I think the PSC should investigate this.

Field Marshal Fonseka: You have told the media you also knew those who had prior knowledge of them. Isn’t it?

MP Jayasekera: The attackers blew themselves up at three other five star hotels. We saw, on TV, CCTV footage of the attacks. It also showed a suicide attacker come to Taj, change his mind and leave. Thereafter, he blew himself up at Dehiwala.

Field Marshal Fonseka: So, there are two conclusions. Either bomb did not go off or the attacker had been given instructions not to explode himself there. Is it so?

MP Jayasekera: I am making conclusions. It is you who make conclusions and try to force them on me.

Field Marshal Fonseka: It is that the bomb was not exploded at Hotel Taj because of some persons who lodged there?

MP Jayasekera: All I am asking the PSC to do is to get the list of names of persons who stayed at Taj on that day and the previous night. You could get the names of their room numbers. You can ask for the names of those who had breakfast there on that day.

Field Marshal Fonseka: Even a child of this country knows that the attack was carried out by the ISIS. Entire world knows that.

MP Jayasekera: No political leader has said so clearly. You can check Hansard. None of them have said so categorically. They only said ISIS might have carried out the attacks. You may credit this to the ISIS account, but the country is not ready to accept it.

Field Marshal Fonseka: But even the intelligence and security officials stated that the ISIS had carried out the attacks.

MP Jayasekera: If you can prove that, then I may change my mind. I state that there has been no concrete evidence. There have been only inferences and guesses. If the PSC really wants to prevent the recurrence of such attacks again, please do not turn this into a political circus. That would not solve the problem or save the country from terrorists. There is no point of leveling allegations against the President, Ministers and 225 MPs. Find the truth.

Minister Karunanayake: You are referring to foreign powers. If you name them then it would be easy for us. If you know the name of the country and could name it, for example if you think Swaziland is responsible for this then name it.

MP Jayasekera: I cannot hold Swaziland responsible for this attack.

MP Hakeem: Yes there are some doubts about the ISIS connection. There were reports that some persons had been in Syria to be trained by ISIS. And then there are new reports surfacing that ISIS did not know of the attack and it accepted the responsibility several days after the blasts. That, too, after a request from a very powerful politician in Sri Lanka to the ISIS to do so, according to the reports. What have you to say to that?

MP Jayasekera: I am telling the same thing. Now only certain matters are coming out. The attacks were attributed to ISIS and there was an attempt to instigate the Sinhalese against Muslims. I am asking you only to inquire and find out who had been there at Hotel Taj during that weekend so that you could find who had been behind the attacks.

Dr Wickramaratne: So you cannot name the country and have no intention of doing so?

MP Jayasekera: No, I still cannot do that. It is the duty of security and intelligence establishments to do the investigations and find the truth.

Prof Marasinghe: You attended a National Security Council meeting after this attack.

Prof Marasinghe: Did you raise those issues there at the NSC meeting.

Minister Karunanayake: Now according to your testimony, you have serious doubts and are you ready to tell us about them.

MP Jayasekera: I have doubts. I am not ready to talk of my doubts. I will have those doubts till I am in a position to clear them. It is up to the security establishments to get at the truth.

Field Marshal Fonseka: You say that a foreign power is there. You state that funds had been pumped and assistance given by a foreign country. Could you name it if you know it?

MP Jayasekera: Follow the money trail. You can find how Zahran and many others in his Thowheed Jamaath received funds for years as per the police investigations. You can easily find it. You can also find from where those funds came whether they were in dollars or they had come from India.