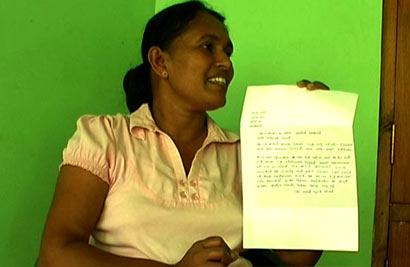 The teacher of Nawagaththegama Navodya School who was forced to be knelt down in presence of a local politician had been threatened with death, the Nawagaththegama Police said citing her complaint today.Teacher Susila Herath was forced to kneel down by the former North Western Provincial Councilor Ananda Sarath Kumara for advising his daughter.Ceylon Teachers’ Union General Secretary Joseph Stalin said the threatening letter was sent  under the name of Councilor Ananda Sarath Kumara.Stalin said this was to suppress the investigation into the death of an eye witness of the case.The body of the witness, who gave crucial evidence in the case in which Ananda Sarath Kumara was convicted for ill treating the teacher, was found in an abandoned well at Nawagaththegama last Friday.