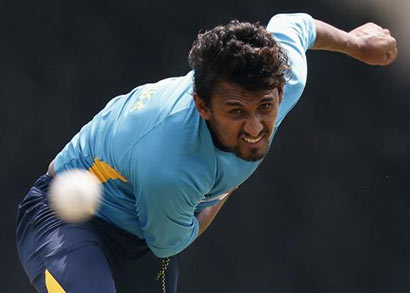 Sri Lanka paceman Suranga Lakmal will miss the Pakistan test series due to an ankle injury, dashing the home team’s hopes of fielding their most potent new-ball partnership in the opening match on Wednesday.

“Lakmal has sustained severe swelling above his left ankle following the second test against South Africa and unfortunately he is out of the series,” Sri Lanka captain Angelo Mathews told a pre-match news conference on Tuesday.

The injury to Lakmal, who was named in the 15-man squad for the two-match series pending a late fitness test, comes at a unfortunate time as it coincides with the return of new ball partner Shaminda Eranga.

Eranga had eight stitches in the webbing of his right hand, an injury he sustained in the first test against South Africa at Galle three weeks ago and missed the rest of the series.

“Either Eranga or Suranga has been injured since the Bangladesh series (in February), so we haven’t have both of them together… which would have been a very formidable attack,” Mathews said.

“But I still have a good (pace) attack in Dhammika Prasad and Nuwan Pradeep.

“They’ve bowled pretty well in the recent past and the two spinners, Rangana Herath and Dilruwan Perera, have been bowling magnificently.

“I feel that I’ve got the bowling attack to take 20 wickets,” he added.

“In the second test against South Africa we were almost going to win it, unfortunately the weather gods had other ideas,” Mathews said.

“Pakistan has been a very hard team to beat wherever they play… we expect a bigger challenge from them definitely.

“They’ve got a very well balanced team and they’ve got some good batters, good spinners and good fast bowlers.