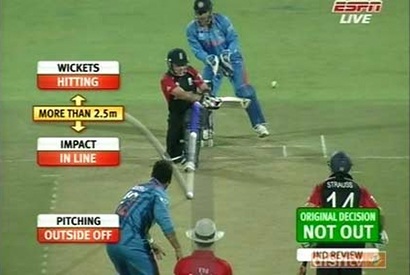 The ICC Champions Trophy has concluded and a feature article in a Sunday newspaper titled ‘Recognition of the Authorship of UDRS’ by a cricket observer, showcases some key facts that we need to take cognizance of in the realm of sports, particularly in the game of cricket.

The old club colonial mentality remains a key feature in big time sports such as cricket, soccer, rugby – football, tennis, and even in the management of the Olympics judging by the manner key posts of international sports bodies are filled. Colonial mindset seethes with prejudice. Imperialism never really allows heroes to emerge outside its narrow euro – centric circles.

Focusing on Cricket, the UDRS has been hailed as the most revolutionary step taken to reform cricket rules since the inception of the game, as the new rule challenges a fundamental premise of traditional cricket i.e. Umpire’s decision is final. Almost all the Test Cricket playing countries bar India have accepted this new System.

We note that UDRS has achieved remarkable outcomes. Umpire decisions now register an accuracy of 97% up from 91% or less ever since the introduction of UDRS into the Test playing arena in October 2009. Acrimony between players on the ground in much less today. The tension that used to prevail in the past between cricket playing nations on ground of poor umpiring decisions is in rapid decline. Rudi Koertzen, the South African Test umpire, said in his valedictory speech that UDRS should be made mandatory across the world. Cricket has made technology its bride, and it has worked for the better for almost everyone.

It is somewhat depressing to record that while accolades are flowing in for the innovation and beneficial results, there has been almost total silence in the international cricket circles on the question of origin or authorship of the new Rule, until Robert Steen, senior lecturer in sports journalism at the University of Brighton, England and reputed cricket commentator, in an insightful article on the ‘Cricinfo’ website under the title ‘Will the UDRS be proved a good thing?’ referred to the Umpire Decision Review System (UDRS) as one of the most potentially far-reaching concepts the old game has ever known, and  added as follows:

” LET’S REWIND to the hotly contested conception of the review system,for which Senaka Weeraratna, a lawyer, believes we must thank/berate him – and not, repeat not, the ICC”.

Steen adds “ He (Senaka Weeraratna) has been arguing for some time, and with some vehemence, that it was his letter to Colombo’s Sunday Times, on April 6, 1997, the first of many such that sowed the seeds. In an ocean of common sense, that letter likened the players’ right to challenge to the appeal of a “dissatisfied litigant”. As Simon Barnes put it recently in the Times: “Referral is not dissent, it is a legitimate process of truth-seeking.

At Old Trafford three months after Senaka’s missive was published, Greg Blewett was given out to a horribly un-straightforward catch by Nasser Hussain – for which the available TV replays, foreshortening as they still do, proved inconclusive”.

Robert Steen in another article based on a comprehensive survey done on all aspects of UDRS under the title ‘Going upstairs: The decision review system – velvet revolution or thin edge of an ethical wedge?’ published in ‘Sport in Society’ Journal (Vol. 14, Issue 10, 2011) re-iterated the above as follows:

‘ Senaka Weeraratna, a Sri Lankan-born lawyer .., maintains that it was his 1997 letter to The Australian, the first of many, which planted the seeds for what became the DRS. In writing it, illuminatingly, he likened the players’ right to challenge umpires to the appeal of a ‘dissatisfied litigant’. (‘Allow appeals to the Third Umpire’, Letters  to the Editor, ‘The Australian’, 25 March 1997 (copy sent by author; referred to at http://sundaytimes.lk/060528/sports/6.html)

Weeraratna claims unequivocally that the basic elements of the UDRS have been adopted by the International Cricket Council (ICC) from his writings and he now seeks official recognition from the ICC for his innovative contribution. “I have publicized this concept by writing to newspapers, magazines and cricket journals both local and international, over a period of time beginning with my letter to the Editor of the ‘Australian’ newspaper published on the 25th of March, 1997. I have also made written representations to the national cricket controlling authorities of several leading cricket countries including the then Board of Cricket Control in Sri Lanka in 1997, and thereafter Sri Lanka Cricket, offering my proposals as a solution to the tricky problem of umpiring errors that invariably lead to a distortion in the outcome of a game.”

Frank Duckworth and Tony Lewis, two Englishmen, are constantly projected by the media as having devised the Duckworth Lewis Rule applicable in rain affected one-day matches. This DL Rule comes into play only in limited circumstances. Stuart Robertson, the former Marketing Manager, England and Wales Cricket Board, has been hailed as the founder of the Twenty 20 Cricket format.

However there is huge reticence on the part of ICC in attributing credit to Senaka Weeraratna. This is unfortunate. As cricket lovers we have every right to ask the ICC if Senaka Weeraratna is not the author, who is the author and identify him with tenable evidence to substantiate such assertion?

The Cricket Committee of the ICC has sanctioned the use of Player – referral in May 2006 and has claimed that it was borrowed from Tennis. But it must be stressed here that Instant Replay system to resolve tennis line disputes was first introduced at the US Open in 2006. In contrast Weeraratna had published his writings advocating an appellate role for the Third Umpire as far back as March 1997.

Its been over 16 years now and Senaka Weeraratna is fighting a lone battle to gain recognition for something now being used internationally. How wrong is this of all parties concerned?

That the ICC is and has been and will continue to be influenced by western thinking and prejudices is what we now need to change. Countries are said to be independent but are they truly particularly in the cricket world?

Is the ICC free of South African ‘Apartheid’ mindset influence?

David Richardson, current CEO of the ICC and David Becker, then head of Legal, ICC are both white South Africans born and bred during the ‘ Whites only’  Apartheid era. Haroon Lorgat, the former CEO, another South African born, is of Indian Muslim descent. He has shown repeatedly that he lacks a mind of his own, of weak disposition and more fits the description of an ‘Uncle Tom’ of the South African variety.

Yet making matters difficult is the fact that former colonies such as India, Pakistan, West Indies, Bangladesh, Zimbabwe, Kenya and the like, are not united to work together and close ranks in the cricket firmament, unlike the ‘white countries’ such as England, Australia, and New Zealand which work in unison, to demand due recognition for their nationals and individually countries themselves are jealous of their fellow citizens gaining the limelight. This is a shame. Thus the full stops to a man or woman recognizing their full potential has many obstacles which rightfully need to change. A person who is entitled to be recognized for his or her achievements should be recognized. Just as one would expect the same in the school system.

When Senaka Weeraratna has been publicizing his writings and claims in local and international newspapers for more than a decade why has Sri Lanka’s Cricket Board, Cricket Commentators, the Sports Ministry and even the Sri Lankan Government not thought of championing his cause to ensure that Sri Lanka in particular gets the merit for Weeraratna’s brain child ‘ Player – Referral’ which underlies the UDRS and now used the world over as a universally recognized system?

Isn’t that a prestige in itself to have a son of Sri Lanka invent a system that is now universally used in international cricket?

There is no other credible claimant to the authorship of the UDRS and Senaka has enough of material to prove that he is the father of ‘Player – Referral’ of not only cricket but of any sport, because the philosophy that Senaka Weeraratna has propounded in advancing his ‘Player – Referral’ concept is fundamentally different to the Coach Referral concept found in American Football.

Moreover Wikipedia has also acknowledged and published the claims of Senaka Weeraratna.

It is said that the late Tony Greig had advised Senaka Weeraratna that to get the ball rolling it is the Sri Lankan State and Sri Lanka Cricket Board that must take up the cause with the ICC with full legal backing. Their failure in this instance is tantamount to a dereliction of national duty.

The right thing to do even at this stage is to demand recognition by way of the UDRS being re- named as the Senaka Weeraratna Rule. It is time that inventions that have universal applicability be associated with non – European names as an example of true de-colonization. This will be a good ground breaking start in that direction and inspire the teeming millions in the decolonized world that their brainwork too can gain international recognition.

Letting down our own people – reprehensible Sri Lankan trait

As an example the fates that befell two individuals need to be highlighted in this context.

Mr. Shirley Amarasinghe was a dynamic individual and top class Civil Servant. In spite of his remarkable talents and pioneering contributions to the making of the rules concerning the law of the sea, he was not nominated even as a delegate of Sri Lanka to the Law of the Sea Conference by the Government of the then President Jayawardena – the reason – sheer jealousy. However, the UN not only recognized his value, he went on to be nominated by several other countries including the Arab nations and Ambassador Amarasinghe became elected as the permanent chairman by acclamation. It was a proud moment for Sri Lanka but behind the scene jealousy almost denied Ambassador Amarasinghe his due credit.

An article by K Godage highlights the type of individual Mr. Amarasinghe was.

We next come to Justice C.G. Weeramantry, world renowned judge and jurist. His case was no different to Ambassador Amarasinghe. J R Jayewardene, President of Sri Lanka again refused to support his candidature for membership of the International Court of Justice – eventually President Premadasa did and he went on to becoming the Vice – President of the ICJ. Once again jealousy coming to the forefront without any consideration for the merit that an eligible nominee from Sri Lanka would gain for the country internationally.

It is because of rivalry and innate envy that a lot of citizens are forced to leave the country or are reluctant to place their ideas for fear of them getting copied or disapproved – all this is denying productivity and recognition for both the individual and the entire nation.

In Sri Lanka too it must be noted that recognition for innovation of this rule has been slow in coming. The saying that the prophet is never honoured in his home country is amply manifest in this context. In another society the likes of Senaka Weeraratna given the significance of his contribution towards improving the degree of accuracy in the adjudicatory process of a nation’s king sport would have had high celebratory status by now.

The Sports Minister and the Sri Lankan Government would well do to ensure that the UDRS is re- named after Senaka Weeraratna, and the ICC and other Cricket playing nations must be sent official letters, and the matter followed – up until this contribution of a son of Sri Lanka is recognized and granted due credit by the ICC and the cricket world.