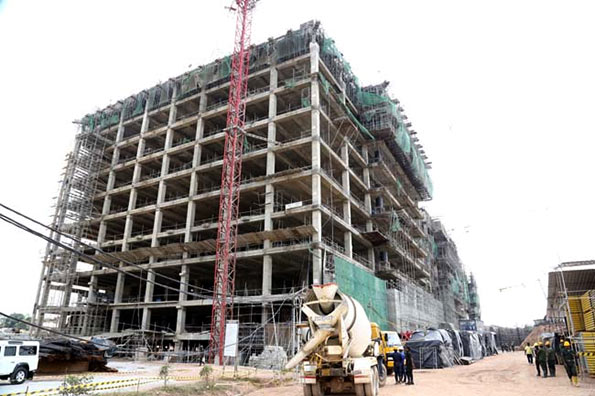 Construction work on the Defence Headquarters Complex in Battaramulla has come to a halt due to non-availability of funds, and Finance Minister Ravi Karunanayake saying funds will not be released until the exact cost estimation of the project is clarified.

Minister Karunanayake told the Daily Mirror that the necessary funds were available but it would not be released until a conclusion was reached on the amount of finances the project would involve.

“What exactly is the cost of the entire project? Where is the cabinet approval for the costing? The exact costing of the project is not mentioned in any of the documents available on the project. In one document it states a portion of 2.5% off the total cost which is Rs. 50 billion is commissioned to the architectural firm involved with it. These figures need probing – these are questions that need to be answered before the funds are released,” he said.

The funds contained in the irregular Defence Ministry account –finances collected through CATIC and Shangri-La deals – that was highlighted by Minister Karunanayake himself, were reserved for the construction expenses of the Defence Headquarters.

“As a responsible government we cannot simply release tax payers’ money unless it’s certain that they are put to good use. Presently, this project seems like a bottomless pit and we need to know the depth of what we are getting into. From the current state of finances allocated for this project it seems as if they are building a complex that’s even bigger than the Pentagon!” the Minister remarked.

Speaking further he said the finance would be released as soon as the cost details are determined. “It is not a case of not being equipped with the finances – it’s just a case of removing the corruption element from the previous contract,” he added.