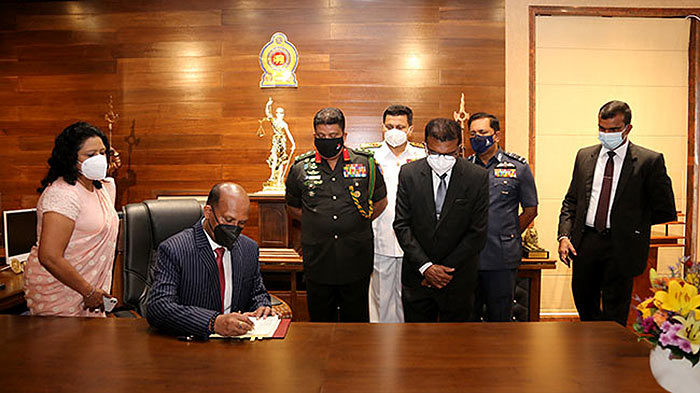 The Defence Ministry was shifted to the newly constructed Defence Headquarters Complex in Sri Jayawardenepura, Kotte today (May 18).

At the event organized to coincide the 12th anniversary of the Victory Day over terrorism, Defence Secretary Gen. Kamal Gunaratne (Retd) declared open the new building complex amidst the blessings of the Ven. Maha Sanga.

To symbolize the new beginning, the signing of official correspondence was held in his office auspiciously during the session.

Meanwhile, Gen. Gunaratne handed over the document to proceed with the recently announced Cabinet approval for the lifetime salary and allowances payment for war hero dependents, to the Tri-Forces Commanders and the Inspector General of Police (IGP).

Opening a new avenue for the children of retired service personnel, approval was also granted to enrol their children to the Defence Services College, Colombo during the session.

“It is a tribute to our war veterans on this memorable day” the Defence Secretary said.

While expressing new hopes, he said “It will be a great leap forward in strengthening the national security in the country”.

During the brief ceremony, religious blessings were also invoked to the officers, soldiers, sailors, airmen, police and Civil Security Department (CSD) personnel who made the supreme sacrifice, who went missing and disabled during the war.

An all-night pirith chanting ceremony will be held in the new premises today to invoke blessings to the Tri-Forces and commemorate the war veterans who sacrificed their lives and limbs during the battle.

This new state-of-the-art complex built with military expertise will house all the sections of the Defence Ministry that were previously situated in different locations.

A greater output could be experienced once the Tri-Forces Headquarters commence their respective operations in the same location in near future.