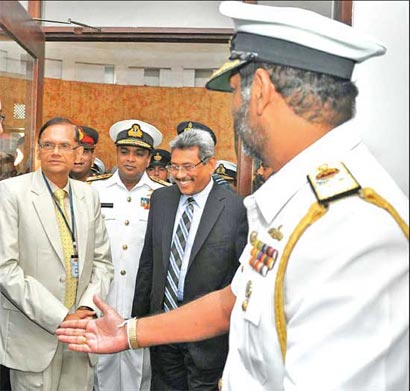 Sri Lanka while insisting that the lack of a coordinated effort to uphold maritime security affects oceangoing vessels and the coastal nations, yesterday called for greater cooperation to boost such security.

Defence and Urban Development Ministry Secretary Gotabhaya Rajapaksa said the Sri Lankan experience in combating one of the most ruthless terrorist organizations in the world – the LTTE- is instructive in facing the threats of maritime security.

He said that the LTTE smuggled formidable arsenals of weapons which included most modern weapons and light aircraft. “None of these items were made in Sri Lanka.

They were manufactured in various parts by LTTE front organizations and operatives illegally, smuggled them into Sri Lanka via sea,” he said.

The Defence Secretary was delivering the keynote address at the inauguration of Galle Dialogue 2011 – the international maritime security conference at Light House Hotel in Galle yesterday.

The event was organized by the Sri Lanka Navy.

Defence and Urban Development Secretary Rajapaksa said that the LTTE managed to ship this equipment to the country in over 20 large vessels and a large number of trawlers registered under different flags.

He said that the Sri Lanka Navy went into deep sea on five occasions to destroy eight of these floating warehouses during the humanitarian operation between 2006 and 2009.

The Secretary added that far reaching measures are needed at the highest level to address this threat in a coordinated fashion. “All costal nations are vulnerable to threats from the sea and terrorists will exploit the weak points in our defences to their advantage,” he added.

He opined that the overall maritime security can be enhanced through cooperation of maritime powers by sharing intelligence, joint and coordinated patrols as well as exercises to boost interoperability.

Referring to Somali pirates, Rajapaksa stressed that the existing international maritime laws and practices have proven ineffective in combating the activities of Somali pirates. “Merchant vessels were traditionally forbidden to carry weapons, the protective measures adopted by them were often too weak to withstand the escalating sophistication of the pirates,” he said.

Rajapaksa added that some countries like the United States have adjusted their maritime laws to enable private security personnel to travel on board merchant vessels.

The Secretary noted that a few countries have expressed interest in sending personnel from their national militaries on board merchant vessels to provide security for those ships and have requested Sri Lanka’s assistance during transit.