Destroyed documents to be collected from respective courts 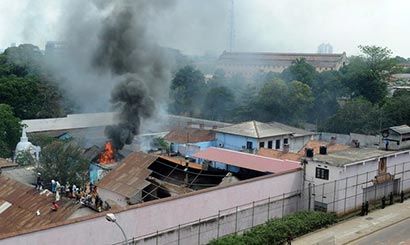 The Prison Department is to collect the criminal records of the prisoners in remand for narcotic offences from respective courts destroyed after the records room of the Magazine remand prison was set on fire during riots on Tuesday, a senior prison officer said.

“Most of the records destroyed were their character reports prepared by prison officers and criminal records. Character reports are prepared for future reference in order to deduct their prison term if they are behaving well for a considerable time period without causing any problems,” he said.

The riots which took place in the Magazine remand prison had cost a damage of Rs.10 million to the Prison Department.

The inmates had protested against strict measures implemented by the new superintendent. The Superintended of Prisons (SP) had cracked down on all methods used by the prisoners to smuggle in drugs into the Magazine prison where 1,800 remand prisoners are accommodated presently.

Meanwhile the Colombo Crime Division (CCD) is conducting investigations into the riots as they had damaged state property and also the criminal aspect of the incident. A probe into the clash and the protest has already being initiated by the
Prisons Department.

According to the police a case can be filed against the prisoners in courts for damaging state property.

Home » Destroyed documents to be collected from respective courts