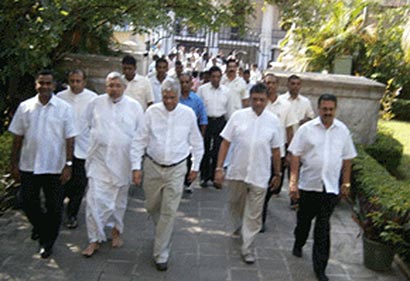 UNP and Opposition Leader Ranil Wickremesinghe Saturday condemned politicians making use of occasions such as venerating the tooth relic and private meetings with religious dignitaries for political propaganda activities.

Obviously hinting at his rival Sajith Premadasa, he said that it was not his policy to capitalize on a religious event to get political mileage.

He said that paying homage to the tooth relic and meeting with Mahanayakes at the Dalada Maligawa were his personal functions and therefore did not invite the journalists there.

Wickremesinghe said this in response to a question raised by some journalists who demanded to know why they had not been invited to cover the occasion when the leader of the Opposition visited the Dalada Maligawa.

I would not make use of the tooth relic, maha sangha or another religion or a religious leader to practice my politics. I have many other public functions where the journalists could come and give coverage, he said inviting the press men for a political meeting held at a hotel in Kandy the same evening.