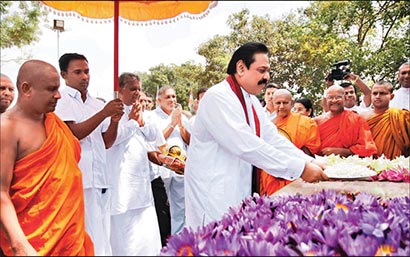 ‘In finding solutions to whatever issues the country faces, the government would always look for home-grown methods, that meet the aspirations and needs of the people, President Mahinda Rajapaksa said yesterday. He said that solutions to country’s problems should come from within based on dialogue and understanding and stressed that he and the government were always prepared to listen and were open for discussion to resolve any issues on behalf of the people.

The President said that this was not the time for divisive politics but for unity to uphold the people’s trust by improving their living standards and ensuring them a better and prosperous future. This is the responsibility of all politicians, he added

He urged all Sri Lankans, irrespective of differences, to stand united to achieve equity in both the country’s and people’s development.

The President said so addressing a large gathering in Polonnaruwa following the launch of the Polonnaruwa water supply project. The Rs.5,020 million project vested with the public by the President yesterday would provide safe drinking water to over 80,000 people in 42 GS divisions in the district.

Addressing the gathering following the launch the President stressed the need to achieve equity in development. He said, development should not be confined to one area. It should be equally distributed in all areas. All people, irrespective of differences, should reap its benefits. We should all stand as one. This is our aim.

To achieve the above he said the government had a commitment to provide equal facilities and was prepared to do so to the best of its ability.

However, the President said that it was imperative to have unity to go forward . ‘The government is always prepared to listen to constructive criticismand learn from observations. But what is the gain of spreading hatred and spurring divisions, he questioned. He said that the media too had a duty to engage in constructive criticism, highlight peoples aspirations, governments development for the greater good of the people, without engaging in slander which could spawn hatred and divisions.

He also emphasized the government’s commitment to develop areas which had been neglected due the 30 year scourge of terrorism. These

areas are being developed rapidly on par with other areas he added.

Speaking on providing safe drinking water to the public the President said that with the aid of recent water supply projects the government had been able to provide water to 61 per cent of the public and added that this was expanding rapidly.

The Polonnaruwa Water Supply Scheme would cover 42 GS divisions in Thamankaduwa and Hingurakgoda DS divisions. A similar project to provide drinking water to Minneriya is on the way.

The water supply chain runs for 140 Kms. It has three water tanks and would have a daily capacity of 60,000 cubic metres.

The ADB has assisted in constructing the project by way of funds. In constructions, Korean firms have assisted local engineers.Ministers Maithripala Sirisena and Dinesh Gunewardene also spoke. A large public gathering, local politicians, officials, ADB representatives, and the ambassador of South Korea were also present.

1 Response to President in Polonnaruwa: Home-grown solutions to Lanka’s issues