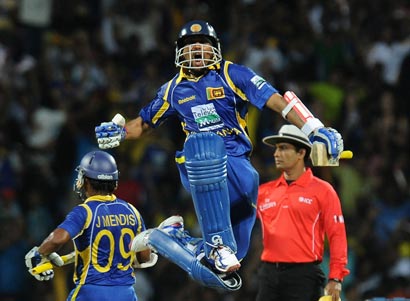 Tillakaratne Dilshan hit a maiden century off just 57 balls and Dilruwan Perera took three wickets to lead Sri Lanka to a 35-run win against Australia in the first Twenty20 match on Saturday. Dilshan hit five sixes and 12 boundaries for an unbeaten 104 as Sri Lanka ended on 198-3 in 20 overs.

In reply Australia could only manage 163-8. Offspin bowler Dilruwan Perera picked up 3-26. David Warner top scored for Australia with 53 but Sri Lanka’s bowlers took wickets at crucial moments. Australian captain Cameron White said chasing 199 was possible on a quick outfield. “We didn’t play as well as we liked to,’’ White said. “Dilshan took the game away from us.”

Seamer Nuwan Kulasekara made the first breakthrough for the hosts when he bowled Shane Watson (10) with the total on 18. Shaun Marsh was unlucky to be given out lbw to a delivery from Perera that appeared to be missing the leg stump. Perera bowled David Hussey (6) and White (7) to give his team control. Warner hit two sixes and six boundaries before he was caught by Dilshan for Kulasekara’s second wicket. Kulasekara returned 2-39. Asked to bat first by White, Sri Lanka lost opener Mahela Jayawardene early for 11, bowled by pace bowler Brett Lee with the total on 12. Jayawardene backed off and tried to guide a full-length ball to third man but only managed to play on to the stumps.