Dissolution of Parliament would prevent implementation of promises – President 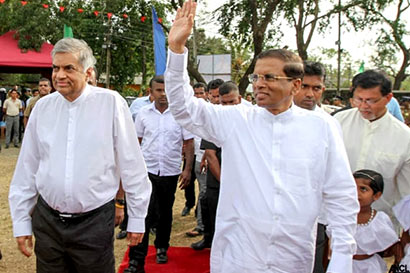 President Maithripala Sirsena yesterday said he can dissolve Parliament at any time after discussions with the United National Party and other parties which helped elect him President, adding that such a dissolution would prevent the implementation of what he promised to the people at the last Presidential election.

“Implementation of what we promised to the people at the last Presidential election including Constitutional change is of primary importance,” the President said.

He said if he dissolves Parliament, the changes expected by the people who helped elect him as President would not materialize.

The President was speaking at a felicitation ceremony organized by the people of Thopawewa at a school ground in Polonaruwa.

“Those who supported me from the United National Party and other parties may be perplexed after I was made the SLFP leader, but, SLFP support in Parliament is necessary in order to effect these changes,” President Sirisdena said.

He added that the SLFP’s support in Parliament is vital for the implementation of what was promised at the last Presidential election. The President said the Executive Presidential System in Sri Lanka has unlimited power which cannot be exercised without the Legislative power.

“Our prime objective is to accomplish what the people expected of us at the election by affecting the necessary changes in the Constitution with the support of all parties in Parliament,” he said.

The President added that he contested the last Presidential election risking his life, adding that the people in Polonnaruwa would never have been able to see him if he lost the election.

“My whole family may have disappeared if I had lost the last Presidential election. The previous regime led by President Mahinda Rajapaksa had devised all plans to take my children into custody.”

The President said that the former President is now complaining that he does not have a house. “I ask him whether he would have given me a house, If I had lost the election?” the President asked.

President Sirisena added that he faced innumerable challenges, insults, character assassinations after he became the common candidate at the last Presidential election. “The people in Polonnaruwa and the country gave me the strength and courage to face various challenges in a successful manner,” he said

The President added that the present Government has built a new political culture in the country after the joint opposition led by United National Party helped elect him President. He said he promised to form an all party or national government through his election manifesto though supporters of several parties who supported him were dismayed about him becoming the SLFP president. The President condemned all forms of pre and post election violence and invited all political leaders in the Polonnaruwa district who worked against him at the last presidential election to join hands with him for the development of the entire countrynot only Polonnaruwa.

“I have hatred towards nobody, nor do I take revenge against anyone,” the President added.

The President said that he and the government created a new political culture in the country “We want to eradicate poverty and establish democracy and freedom in the country,” he said

The President added that, he succeeded in joining with UNP leader and Prime Minister Ranil Wickremesinghe and 49 other organizations to form the broadest movement ever in post independent Sri Lanka, to end the most corrupt Rajapaksa regime.

He said that the organizations that joined him including the Jathika Hela Urumaya, Democratic Party, Tamil National Alliance Sri Lanka Muslim Congress, All Ceylon Muslim Congress, Sri Lanka Freedom Party, and people from all walks of life deserve credit and honour for this victory.

The President added that the previous regime utilized state and political power in an unprecedented manner during the election campaign in violation of elections regulations.

“Every leader of the country, including Prime Ministers D.S. Senanayake and S.W.R.D. Bandaraniake have a long standing tradition of respecting the outcome of elections after facing them in a democratic manner,” he said..

Home » Dissolution of Parliament would prevent implementation of promises – President