Don’t give in to conspiracies of foes 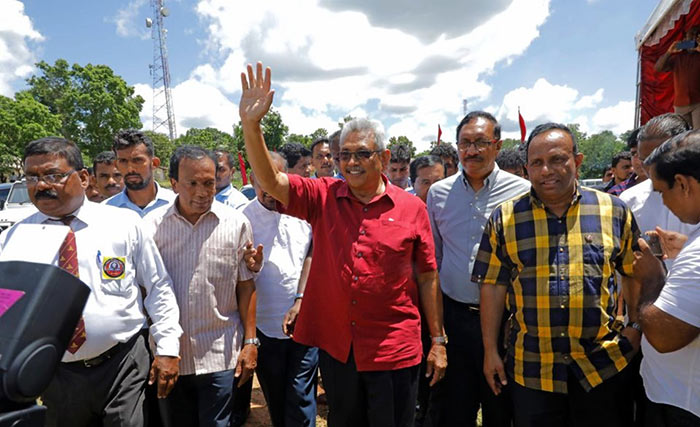 SLPP presidential candidate Gotabaya Rajapaksa said today their political camp should not give in to conspiracies of political opponents.

Addressing a public rally held at Galgamuwa in Kurunegala, Mr. Rajapaksa said they shouldn’t behave indecently after giving into conspiracies of opponents.

“If we give in, we will be fulfilling the needs and objectives of our opponents. Therefore, if we are to win, we should secure all votes. If we give in to conspiracies, we cannot achieve this. We have to be intelligent. We need all the support we can muster to win the election. The backing of the SLFP is a blessing. Now, we have the capability to secure 70 per cent of votes at the forthcoming presidential election,” he said.

While assuring he would establish a peaceful country as expected by everyone, Mr. Rajapaksa said no new-liberal government would give prominence to national security.

“We need leadership that doesn’t bow to foreign pressure. We will fortify the intelligence and security services by establishing national security so that investments and foreign tourists will flow in,” he said, while reiterating that they were in possession of sound economic policies to uplift the livelihood of people.

Home » Don’t give in to conspiracies of foes