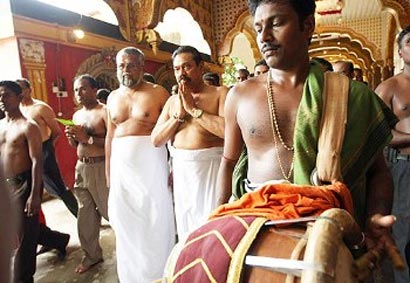 This was well before the founding of the Sinhala Maha Sabha in 1927, and the formation of the Pan Sinhala Board of Ministers a decade later, let alone any oppressive legislation or actions against Tamils. It resulted in a fissure in the multiethnic Ceylon National Congress.

Then again, though the discriminatory disenfranchisement of the hill country Tamils had indeed taken place, ‘Sinhala Only’ was many years away and the quintessentially secular Ceylonese state as framed by the Soulbury Constitution remained intact when SJV Chelvanayagam demanded a federal system with a merged North-East and Trincomalee “as its capital”. This while quasi-federalism, not full federalism, was good enough for 70 million Tamils in Tamil Nadu!

N Sanmugathasan, the outstanding Tamil Leninist-Maoist, had excoriated in his writings and speeches, Tamil federalism for having opposed “every single progressive measure” introduced in the country, which led to a wide gulf between the Sinhala masses and the Tamil nationalists. V Karalasingham of the LSSP had in his famous pamphlet, already warned in 1977, that Tamil nationalism had long identified with Zionist Israel, not national liberation struggles the world over.

Famed Indian Lankanologist Urmila Phadnis of the Jawaharlal Nehru University had debunked the notion that there was ever a legitimate Tamil nationalist claim to the East, noting that neither demography nor the results of the 1977 election bore it out. In her last book, republished posthumously, she had also noted that Sri Lankan Tamil nationalism, unlike ethno-lingual nationalism or sub-nationalism in India, demonstrates a distressing dynamic of what she termed “an autonomist-secessionist continuum”. I experienced the validity of her observation with Vardarajaperumal’s Chief Ministership of the North East Provincial Council (NEPC).

The history of Tamil nationalism has been a history of negativism and – if one may borrow a metaphor from economics—hyper inflation, where rhetorical and programmatic fancy far exceed real political, military or diplomatic output. By contrast, Devananda stays close to reality, close to the ground and the grass roots.

What the scenes from Jaffna during last week’s presidential visit show is that Douglas has clearly effected a split in Jaffna politics and emerged the clear challenger to both the pro-Tiger political tendency as well as the old confrontational and rhetorical Tamil nationalist leadership represented by the TNA; a tendency which almost always allied with the UNP on the occasions that it entered the mainstream.

Devananda’s is a unique synthesis, merging a moderate-reformist Tamil nationalism with a constructive developmentalism and a populist progressivism. He has shown that it is possible to a Tamil nationalist as well as an integrationist; to work hard at the periphery while remaining a reliable partner of the centre.

The EPDP leader has built a solid mass base, using a two pronged approach: from bottom up, with incessant mass contact even during the war years, and from top down, using his position as a senior minister to deliver goods and services to the people. Douglas’ use of the mass line, tapping into his own practice as the Jaffna commander and head of the military wing of the EPRLF in the early 1980s, inheriting and reactivating the EPRLF’s old social base, and combining it with his interventions as a partner of the Sri Lankan state under three presidents, Premadasa, Chandrika and Mahinda, has enabled him to accumulate considerable political space and social capital.

Like the iconic S. Thondaman from the hills, he has proved a reliable partner of the democratic leadership at the centre. Above all he remained a people’s politician, never forgetting the Jaffna people and their needs even during the war; waging a consistent anti-fascist (anti-Tiger) political and ideological struggle together with the struggle to safeguard and improve the social, economic and material conditions of the Tamil people.

Devananda is a new kind of Tamil nationalist: a welfarist-populist with a developmental touch, a gradualist-incrementalist (almost a Fabian) in terms of strategy, and a national integrator. I can imagine none better to represent the Tamil people in Cabinet and more importantly as Chief Minister. He will not only secure the best deal possible for the upliftment of the Tamil people, he will implement a Kerala type developmental success in the Northern province as a whole. The old Tamil nationalism talked, just as the TNA talks. The Tigers fought and did nothing else. Douglas Devananda works and delivers. His Tamil politics are constructive and productive.

Meanwhile, Harim Pieris, a former advisor to President Kumaratunga in the days that she had really lost touch with what was what in the country, has written the best piece so far on the strategy of the joint opposition at this Presidential election, with a clear if implicit indication that he thinks the strategy is likely to succeed (“Ranil’s Formula for the General’s success”, Daily Mirror Monday Jan 11th 2010).

It’s a good article, a correct piecing together, but to my mind a bad analysis and latent prognosis. I may well be proven wrong and I shan’t go into the why of my demurral until after it is all over, in these crucial closing ten days of a most portentous election.

Speaking strictly as a political scientist I think the ongoing election campaign and national debate entail a basic confusion and conflation of two distinct categories, namely State and Government. This election is one in which we choose the head of state, not just the head of government, and for reasons I have set out earlier I believe that Mahinda Rajapakse makes a better head of state, a better leader for the country, than would his main opponent.

As for our grievances with the government, the administration, these are best settled at the upcoming parliamentary election. I also agree with the arguments of Prof Carlo Fonseka in the Sunday Island of Jan 10th, that even in the worst case scenario (nepotism and corruption) a Mahinda Rajapakse victory would be less risky, less dangerous by far, than a victory for his main opponent.

The election of the main challenger would mean not merely a change of personalities but a change in leadership style which is symbolic and symptomatic of a change in the form and model of state and eventually of the model of governance. These structural changes will not be for the better as they will usher in the most authoritarian rule since that of President Jayewardene and one far more authoritarian, entrenched and potentially coercive than that of President Jayewardene. It may also mean the emergence of a de-facto civilian-military junta, with a power shift at the social level to the NCOs and the rank and file infantry.

Only a future historian can pronounce on whether the successful visit to Jaffna by President Rajapakse and the strong showing by Douglas Devananda on the occasion was a “game changer” and enough of one in an electoral sense, or whether Devananda will prove unsuccessful in converting the support for himself and his party into votes for Mahinda Rajapakse. However, the Duraiappah stadium crowds demonstrate that the game has probably changed within Tamil politics. It also confirmed that had the power elite heeded my advice rather than sacked me for it, it would not have been in as stiff a competition as it is now, for the highest stakes in which winner takes all and loser loses all.

I had argued in my published writing as far back as a year before the war’s end and in the post war months, that the 13th amendment be expeditiously implemented, the psychological collapse of the pro-Tiger forces including the TNA be capitalized upon, the Northern Provincial Council be reactivated and the elections to it, held. The idea evoked a howl of protest from the Sinhala hawks, the chief champion of whom defected to be the head of the coalition for “regime change” while the rest now fulminate against the “regime changers”.

If my suggestion had been implemented at the time, the TNA would have still been suffering from the success of the State’s “shock and awe” tactics against the LTTE, and Douglas Devananda would have had a distinct edge in a provincial council election. As Chief Minister pushing his strategy of integrationist developmental – welfarism with social equity and moderate political autonomy, he would have been able to shift an even greater percentage of Tamil opinion than he seems to have done; and he already seems to have done quite a bit.

Had the Presidential elections been held against such a backdrop, but at the same time that is now being held, the TNA factor and the Tamil nationalist vote would have counted less than it does now, as Harim Pieris’ reconstruction of the opposition strategy reveals.

None of this means that the President will lose; what it does mean is that he could have won comfortably, and this margin could significantly affect the dynamics of a possible second term.

While the citizens have two elections at which to vote, the Tamil people have three: the presidential, parliamentary and provincial council.

Of course it will take these triple elections that the Tamil people now have the opportunity to vote in freedom at, to decide on two large questions, namely whether Devananda’s project has permanently altered the face of Tamil politics and whether his equation with President Rajapakse has laid the foundation of unity between centre and periphery, North and South, Sinhala and Tamil, the cornerstones of which were the Indo-Lanka accord and the 13th amendment.