Voting for Fonseka:”When you are in the Frying Pan You have to Jump” 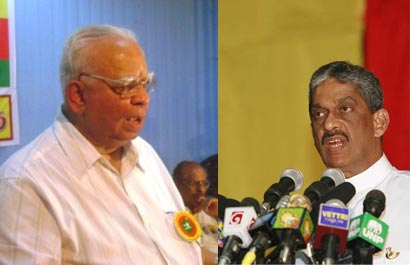 If we were to ask, ‘Is this a good time for a presidential election?’ the answer would have to be ‘No’. At a time when so many urgent tasks are pending – not least that of rebuilding the war-ravaged areas of the country and resettling lakhs of IDPs in proper homes with proper facilities – such colossal expenditure on a premature election could be seen as criminally irresponsible.

Why, then, was it undertaken? Clearly, the incumbent president sought to reinstate himself and his family in power while post-war euphoria was still high, and before the inevitable disenchantment with his regime gripped the majority of the population.

However, given that we are encumbered with this election, it certainly becomes more interesting with the prospect of a real challenge emerging. It is true there are several candidates, but only two can realistically be expected to win: Mahinda Rajapaksa and Sarath Fonseka. Do they really gave us any choice at all?

When we remember that not so long ago, Fonseka declared that Sri Lanka belongs to the Sinhalese, and that he played a major role not only in the defeat of the LTTE but in inflicting the enormous civilian casualties which accompanied that defeat, it comes as a surprise to find that Tamil National Alliance (TNA) MPs are supporting him. These MPs have betrayed their constituents in the past, acting at the behest of the LTTE rather than in the interests of their constituents.

But now that the tyranny of their erstwhile armed master no longer rules them, it is likely that they have to represent their electorate more honestly in order to survive; indeed, they are more at the mercy of their electorates than the Tamil politicians who have chosen to go along with the ruling UPFA.

So what possible reasons could they have for preferring Fonseka to Rajapaksa? The latter never expressed Sinhala supremacism in quite such a crass manner, though his actions showed him to be no less committed to it. Both were responsible for massive civilian casualties inflicted during the war; perhaps Rajapaksa was slightly more responsible, as the ultimate commander-in-chief, but Fonseka displayed no reluctance to carry out his orders. At first sight, there seems to be no reason why Tamils of the North and East should vote for either of them.

However, when we consider that some of the other minority parties have also thrown their weight behind Fonseka, and even anti-LTTE Tamils have observed that it was only after Fonseka joined the fray that the Vanni IDPs were released from detention, two interesting hypotheses emerge. One is that just as much as the carnage at the end of the war, it is the events that preceded and followed it which are responsible for their disenchantment with Rajapaksa.

Fonseka has promised an end to the state of Emergency and the ‘white van’ culture of disappearances and extrajudicial killings, but makes no mention of a political settlement. His promises are minimal, and there is no guarantee that he will deliver on them. What is guaranteed, however, is that if Rajapaksa comes back to power, there will be no political settlement, nor an end to the culture of impunity for gross abuses of human rights. He has had plenty of opportunities to achieve these things before, and has failed to do so.

Even if he claims it was impossible to bring about a just political settlement and reconciliation between communities during the war, he could have achieved these goals in the two-and-a-half years of his incumbency remaining after the war if he genuinely wanted to. The cruel treatment of Tamil IDPs after the war is simply one indication that he had no such agenda in mind.

Partial restoration of freedom of movement in the North started only after it became clear that he could no longer count on overwhelming support from Sinhalese voters. As Namini Wijedasa pointed out, the fact that the TNA could be won over to support Fonseka by a written commitment from him to restore basic democratic rights and civil liberties to Tamils should make us ask: why were these not restored earlier?

The other hypothesis is that Tamils and Muslims are no less concerned about general issues of democracy and governance than their Sinhalese compatriots. For the majority of Sinhalese, Rajapaksa’s strongest recommendation is that he presided over the demise of the LTTE. But just as Fonseka shares the blame for crimes committed at the end of the war, he shares the glory for ending the threat of terrorist separatism.

Again, perhaps Rajapaksa is more responsible for the victory because he was ultimate commander-in-chief, yet it should be obvious that he could not have achieved the victory without Fonseka. On this count, therefore, there is not much to choose between them.

The foremost grievance of Sinhalese opponents of the incumbent seems to be the mind-boggling levels of nepotism and corruption that have engulfed the country during his rule. According to Ven. Dhambara Amila Thero, 391 members of the Rajapaksa extended family have been installed as heads in various government institutions.

If this is anywhere near the truth, it must surely be unprecedented in the thousands of years of Sri Lanka’s history!

As an irate mobile subscriber commented on news website ‘However much Mr Rajapaksa and his humungous extended family believe that anything called an institution in this country – from every branch of government to the media, the arts, sports, and civil society, to St Thomas’ College – is theirs for the taking, invading and populating, I am sorry to say it is not so; and if we value our dignity and democratic citizenship, we should tell them that very clearly.’

The ugly face of this abuse of power is illustrated by the murder of Lasantha Wickramatunga a year ago. Gotabhaya Rajapaksa’s comments to a BBC interviewer made it clear that this was in reprisal for his criticisms of the regime, which allegedly put in him the camp of the terrorists.

Fonseka has promised to abolish the Executive Presidency, implement the 17th Amendment and end the state of Emergency: measures which would go some way towards re-establishing the rule of law and checking the corruption, nepotism and abuse of absolute that mires the present regime. Again, there is no guarantee that he will keep his promises if elected to power.

But the fact that these measures had not already been taken by the incumbent president suggests that if Rajapaksa is re-elected, this would merely enable his regime to ‘consolidate its stranglehold on power,’ to quote Lasantha’s widow, Sonali Samarasinghe Wickramatunga, and make the further subversion of democracy and looting of our country inevitable.

It is worth noting that even if Rajapaksa was the right leader to win the war against the LTTE, this does not make him the right leader in peace-time. Churchill, a great leader during World War II and immensely popular at its end, nonetheless, lost in the 1945 elections. Clearly, the qualities that are necessary for winning a war are not the same as the qualities required in a peace-time leader.

Rajapaksa may have the ruthlessness required to eliminate the LTTE, but the demise of the Constitutional Council, vicious attacks on freedom of expression, and discriminatory treatment of Tamils and Muslims have resulted in the inexorable shrinking of democratic space during his term as president, even after the war.

It remains to be seen whether the unlikely consortium which has assembled to support the common opposition presidential candidate will actually deliver in terms of votes. If it does, that would suggest that a large section of Sri Lanka’s population finds the present dispensation intolerable. As one despairing citizen put it, ‘When you are in a frying pan, you have to jump.’

There is, of course, a serious risk that you will land in the fire and perish anyway, but there is also a chance that you will jump clear of the fire and escape. It looks as if many of those who vote for Fonseka will do so not because they have any illusions about him, but because they are grasping at the slim hope that a change of president will open up some democratic space.

Home » Voting for Fonseka:”When you are in the Frying Pan You have to Jump”