Draft legislation on Truth Commission to Cabinet within next two months 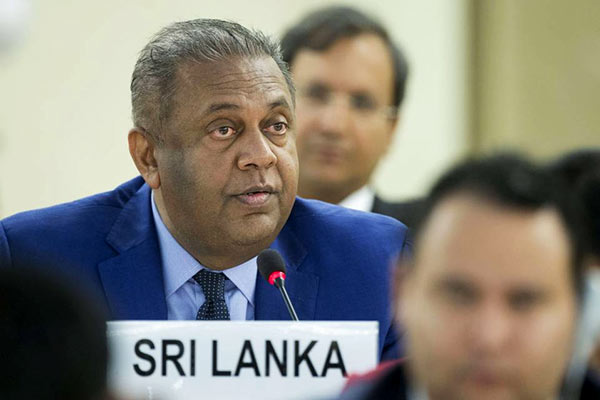 Draft legislation on the Truth-Seeking Commission is to be presented to Cabinet within the next two months, said Foreign Affairs Minister Mangala Samaraweera at the High-Level Segment of the 34th Session of the UN Human Rights Council (UNHRC) in Geneva yesterday.

“Our resolve to bring justice to the victims of human rights violations remains firm”, asserted the minister as he delivered the progress report on Sri Lanka’s human rights and accountability mechanisms.

The government he said was also studying the report of the Consultation Task Force on Reconciliation Mechanisms, “in the context of designing the relevant Mechanisms for Truth-seeking, Reparations, Justice, and other reconciliation processes”. In August 2015, Sri Lanka co-sponsored Resolution 30/1 titled “Promoting Reconciliation and Accountability in Sri Lanka”, which was adopted unanimously by the Council on 1 of October 2015. Fifteen months later, the government returned to Geneva to list out what it had done during the extension given by the UNHRC.

Amidst allegations that the government has not done enough to promote reconciliation and accountability, Minister Samaraweera said; “the forces of extremism and regression on both sides of the divide are creating road blocks for narrow, short-term political gain. While stubbornly refusing to acknowledge any of the far-reaching gains we have made in the last two years, they argue that we have either done too much or too little”.

He however noted that recommendation of the GSP+ concessions from Brussels and MCC compact assistance from USA were in recognition of the progress made in Sri Lanka in the last two years.

The government listing out its achievements said that since the last sessions, they had managed to: to give effect to the International Convention for the Protection of All Persons from Enforced Disappearances; formulate the Policy and Legal Framework of the proposed Counter Terrorism Act in keeping with accepted international practices; enact legislation and establish a Permanent Office on Missing Persons with a budget of over a billion rupees for 2017; the approval of a National Policy on Durable Solutions for Conflict-affected Displacement; the enabling of the issuance of Certificates of Absence; hosted the visit of the UN Secretary-General at the time, Ban Ki-moon and the Special Rapporteur on Minority Issues; the further amendment of the list of Designated Persons under Regulation 4(7) of the UN Regulation No. 1 of 2012; Sri Lanka submitted its progress reports to the Committee on Migrant Workers, the Committee on the Elimination of Racial Discrimination, the Committee Against Torture, and the Committee on the Elimination of Discrimination Against Women; the Reports of the 6 Sub Committees of the Steering Committee tasked with deliberating and submitting reports on fundamental rights; judiciary; law and order; public finance; public service; and centre- periphery relations were handed over to the Constitutional Assembly; the National Human Rights Action Plan for 2017-2021 was approved; the Right to Information Act was brought into force; 11,253 houses were handed over during 2016 to the internally displaced; and Rs. 4,785 million has been allocated for 5,732 houses for the internally displaced for 2017; the Rehabilitation of Persons, Properties and Industries Authority (REPPIA) payments for beneficiaries in 2016 amounted to Rs. 605,809,359.00; and Rs. 574,000,000.00 has been allocated for 2017; 5,515.98 acres of state land and 2,090.03 acres of private land were released in 2016; and 1,383.51 acres of state land and 30.54 acres of private land were released last month, in January 2017 and the first ever National Integration and Reconciliation Week was observed from 8th to 14th January 2017. Samaraweera who also reiterated that the government would follow a policy of zero tolerance on torture pointed out that the National Human Rights Commission had indicated a “downward spiral of incidents”. “Our resolve to see the transitional justice process through, has not diminished”, said the Minister and asked that the international community and Sri Lankans overseas have “patience, understanding, and constant and consistent effort and perseverance”, in their efforts to make the reconciliation process a success.