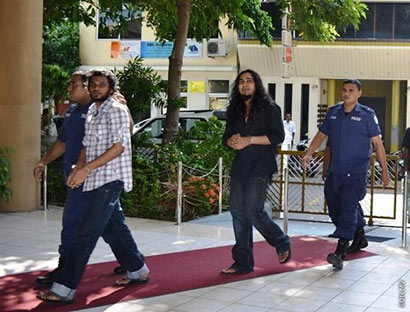 Ibrahim Shafaz Abdul Razzaq (Safa), a local drug lord serving a 18-year prison sentence and missing after being granted permission to leave the country for medical purposes, has been arrested in Sri Lanka.

Shafaz was arrested around 4:00 p.m. local time during a special joint operation conducted by the Maldives Police Service and Sri Lankan police, according to Thazmeel Abdul Samad, Media Coordinator at the Ministry of Home Affairs.

“Safa was arrested under Home Ministry’s orders during a special operation jointly by Maldives and Sri Lankan police,” Thazmeel said. The media coordinator also said Shafaz will be transported back to Maldives on the soonest available flight.

Home Minister Umar Naseer earlier said that Shafaz was travelling under a temporary travel document that would force him to return before its expiry. He also said that the government will also seek an Interpol red notice if the Safa decides to flee.

Shafaz was sentenced in November 2013 for heading a mass drug smuggling operation between 2006 and 2011. Allowed to leave to Sri Lanka in February this year, his three-month leave expired on 5 May. (Source: sun.mv)