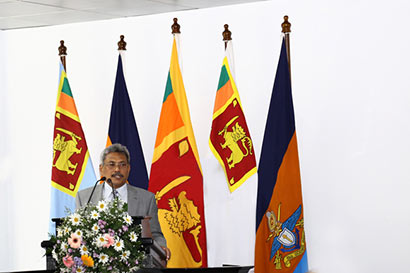 ‘From the point of view of domestic security, perhaps the most critical aspect will be the achievement of national reconciliation and the forging of a common Sri Lankan identity. Economic development is an absolute necessity in this regard’ said the Secretary Defence and Urban Development Mr. Gotabaya Rajapaksa during a lecture at the Kotalawala Defence University (KDU) today (13th June).

Secretary Defence made these observations speaking to students of the inaugural MPhil/PhD Programme of the Kotelawala Defence University.

Further speaking the Secretary said that guarding against potential threats is vital as National Security is the foundation of our freedom and our prosperity. The rise of terrorism and the resulting mayhem fostered a deep insecurity amongst the people and it also increased the involvement of foreign powers in our internal affairs. Even several north and east based INGOs’ had also links with the terrorists, he said.

He further said that the state was forced to take precautionary measures to counter the terrorist attacks that were carried out attacks against civilians in the rest of the country as well. This led to the visible presence of soldiers on the streets and the entire country was effectively on a war footing, he added.

He told those present that despite international presence after the 2002 Ceasefire Agreement the LTTE continued to create instability in the country. In 2006 the state was forced to widen the operations that was begun to reopen the Maavilaru Sluice Gates that had been closed down by the terrorist, denying water to thousands of acres of paddy land.

He explained that by maintaining balance and cooperation with international and regional powers the humanitarian operation progressed unimpeded. The Secretary pointed out the unsuccessful attempts by some European countries in trying to intervene during the final stages of the war reflects the influence of the international network of the terrorist in foreign capitals. Even after the dawn of peace in 2009 the bias against the state continued and out of three resolutions brought against the country at the UN two were successfully passed, he lamented.

Speaking further he said that the prime responsibility of the Government in the post war situation is to ensure continued national security. Without security and stability, there will be no economic development.

‘National Security must be understood within a unified, single framework that integrates the nation’s Defence, Law and Order, Foreign Policy and Economic Policy’ he further said.

He also noted that Restrictions that used to be in force on movement, fishing, high security zones are no more.

He explained the emergence of factions with the death of Prabhakaran that were aimed at continuing the late terrorist leader’s ideology of violence and separatism. He quoted the Tamil Coordinating Committee, Based in Norway, the Transnational Government of Tamil Eelam (TGTE), Global Tamils Forum, LTTE Headquarter Group, based in France and headed by Vinayagam as some of the remnant terrorist groups. He exposed their democratic facade as only a disguise to hide their extremist separatist ideology and expressed concern of the possibility certain elements to feel empowered to revive terrorist activities.

The increasing communalism amongst ethnic groups and the emergence of hard line groups in the majority community are other concerns that need careful addressing. All three communities were affected by the terrorist conflict, he further added.

The Secretary opined that maritime security is another serious National Security Concern and said that human smuggling, poaching by south Indian fishermen, piracy and protecting our oceanic resources including oil and gas are significant maritime security issue. He also stressed the need to expand the responsibilities the Navy and the Coast Guard in this regard.

He attributed the possibility of foreign interference in our internal affairs that remains a significant National Security concern to Sri Lanka’s geostrategic position. He highlighted the need for further strengthening the existing cordial relationships with powerful nations such as China and Russia.

Secretary Defence revealed that in order to streamline and for better coordination, all state intelligence agencies were brought under the Chief of National Intelligence who reports directly to the Secretary himself. He further maintained that it is essential for the military to be placed in strategic locations throughout Sri Lanka as some recent efforts by international groups to reorganise pro-LTTE elements in the North underscores the need for this.

He further stated that a new identity card system that uses biometric information will be introduced shortly.

Summing up his speech the Secretary requested all to stand united in order to ensure Sri Lanka remains safe and strong in the future. ‘Unite as Sri Lankans, and work towards a better future for ourselves and for each other’ he concluded.

During his visit to the KDU the Secretary also declared open the new playground and the Warrent Officer’s Mess. He also inspected the exhibition by the cadets.

Chief of Defence Staff, tri forces commanders and officials of the KDU were present at the occasion 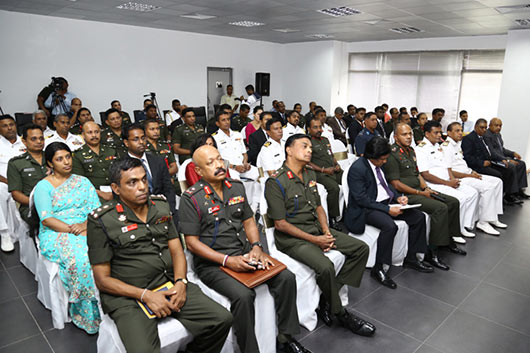 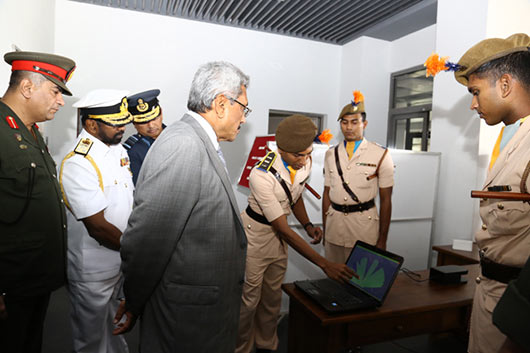