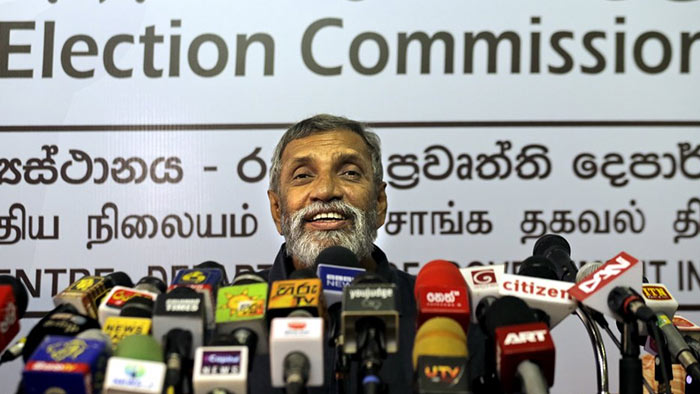 The Election Commission has urged the public to refrain from releasing the conclusions of opinion polls conducted at institutions and classes on to the internet in a manner that disrupts the free and fair conduct of the Presidential Election.

In a special statement the Chairman of the Election Commission Mahinda Deshapriya said such actions are punishable offences according to the electoral law.

The Elections Chief claimed such actions violated the certain clauses such as Article 78 of the Presidential Election Act.

Deshapriya noted that such actions dampen the conduct of a fair Election.

The Chairman stressed equating the results of opinion polls obtained by employees of a company or a group of students to the overall results of the country was a crime.

He added an election was conducted island wide across on one given day and the results were released on one day in order to prevent the results of one area from manipulating the votes of another.

Deshapriya stated for an example the counting of postal votes only commenced once voting concludes claiming if not the results of the postal votes could impact other voters.

Therefore, the Elections Chief requested all law abiding citizens to refrain from conducting such opinion polls.