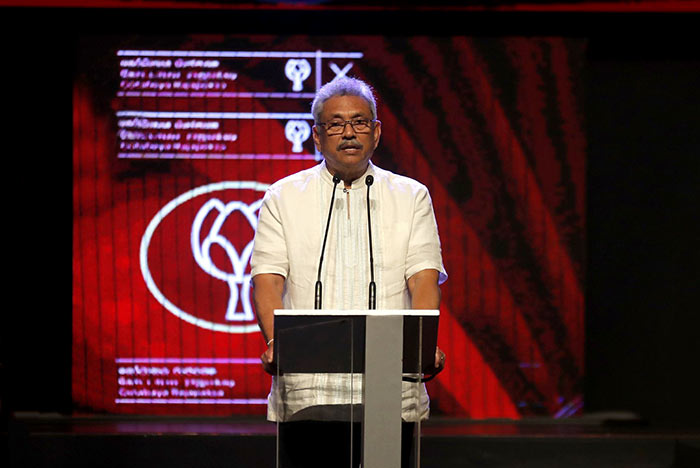 The front-runner in Sri Lanka’s presidential campaign promised that he will rehabilitate and release all military personnel accused of abuses in the country’s civil war, according to a campaign manifesto released Friday.

Gotabaya Rajapaksa said former Tamil Tiger rebels who are imprisoned for their actions in the war would also be released after rehabilitation.

He said last week that if he wins, he won’t recognize an agreement the government made with the U.N. Human Rights Council to investigate alleged war crimes during the civil war.

On Friday, Rajapaksa said he will not allow “any foreign force to make any unnecessary interference in Sri Lanka.”

Rajapaksa served as a powerful defense official during the war under his brother, former President Mahinda Rajapaksa. He has been accused of condoning rape, extrajudicial executions and abductions, charges he denies. He is considered the leading candidate in the Nov. 16 presidential election.

It wasn’t clear what was meant by “rehabilitation.” Rajapaksa and his camp have not explained it further.

According to conservative U.N. estimates, about 100,000 people were killed in the 26-year civil war. A later U.N. report said about 40,000 civilians may have been killed in the final months of the fighting alone.

“Even though we took steps to pardon, rehabilitate and release 13,784 Tiger members who surrendered with arms, such steps were not taken in relation to soldiers who faced different accusations related to the wartime,” the manifesto says.

It says steps will be taken to “systematically rehabilitate and reintegrate” into society not only soldiers but also members of the Tamil Tigers who are facing different accusations related to the war.

Sri Lanka’s government ordered Tamil rebels and any civilians with remote relations to the rebel group to surrender after they were boxed inside a narrow strip of land in the final days of the war in 2009. The government says it released 13,784 people who surrendered, but families say they saw their relatives taken away in buses by soldiers and were never seen again. A protest demanding information about the missing relatives has continued for years.

Rajapaksa’s manifesto does not talk about the missing, but he told reporters earlier this month that no one had disappeared other than those who participated in active combat, and that included thousands of soldiers. He said people must forget the past and move on.

Rajapaksa is a hero to many Sri Lankans – especially ethnic majority Sinhalese – for his crucial role in ending the war. His popularity has been on the rise after Easter suicide attacks by Muslim militants that killed 269 people and wounded 400 others.

On Friday, he said strengthening national security would be a prime responsibility of his government and vowed to “rebuild the state security mechanism to make Sri Lanka a safer country which would be free from terrorism, underworld acts, drug menace and violence.”