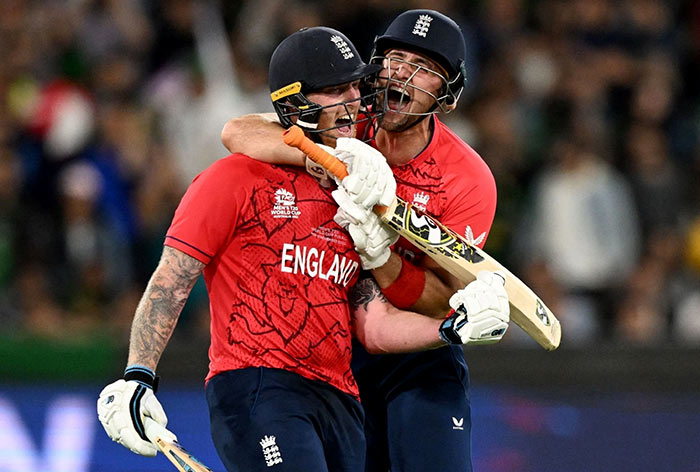 England are T20 World Champions for the second time after Ben Stokes steered them to a six-wicket victory over Pakistan in the final at the MCG.

The Durham all-rounder produced a typically assured 52 not out with some late blows from Moeen Ali helping Jos Buttler’s side chase down their target of 138 from 20 overs with six balls to spare.

Sam Curran was the hero with the ball as his spell of 3-12 from four overs helped restrict Pakistan to 137-8 in the first innings, leaving England a modest target to attack.

Pakistan gave themselves a sniff with three wickets in the powerplay, including both in-form openers Alex Hales and Jos Buttler, but Stokes kept his head to lead England to victory.

Weather had threatened to disrupt the final but the promised heavy rain largely stayed away to allow a full fixture to be played Down Under.

Mohammad Rizwan dragged Curran on to his stumps for 15 as Pakistan laboured to 39-1 from their six-over powerplay.

Adil Rashid joined the party with his very first delivery as Stokes caught Mohammad Haris in the deep to leave Pakistan on the back foot.

They threatened to cut loose as Shan Masood took Liam Livingstone’s solitary over for 16, but Rashid then picked up Babar Azam caught and bowled to wrestle the initiative back for England in what was a rare wicket maiden.

Wickets continued to tumble at regular intervals from there on in, including Curran removing Masood to remove any possibility of Pakistan posting a sizeable total.

Shaheen Shah Afridi got the Pakistan fans on their feet by removing Hales in the first over, and when Phil Salt and Buttler also fell in the powerplay, Babar’s men were dreaming of a famous victory.

England were ahead of the rate at that point but Pakistan applied the squeeze in the middle overs leaving Buttler’s men with 49 to chase from the final six overs.