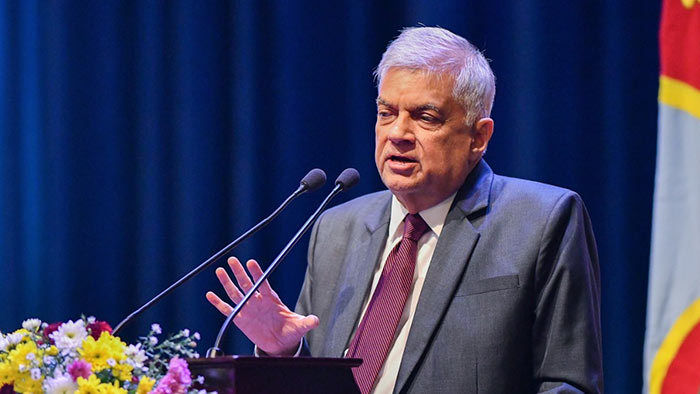 Sri Lanka President Ranil Wickremesinghe reiterated that whatever superpower enters the Indian Ocean, there should not be any threat to India.

Wickremesinghe said that Sri Lanka would not be a party to big power rivalry, specially in the Indian ocean, and at the same time there won’t be any objection whether the US, Japan or China being there as long as there is no any threat to Sri Lanka and India.

“The total competition in the world has gone from US and Russia to US and China,” the President added on Friday addressing the General Convocation of the General Sir John Kotelawala Defence University in Colombo.

“Whether the US is in the Indian Ocean, we have no objections. We have no objections to the Japanese or the Chinese being there, as long as there is no rivalry. We are the littoral states, and we have to look after our interests. The largest of them is India, and being the largest littoral state, India would like very much to ensure that there is no threat to them. We all accept that there should not be any threat to littoral states. It should not lead to a competition or threat that would lead to a rivalry among all of us,” Wickremesinghe said.

“We are a country that comes under pressure for many things, for things which we have not done and we are not responsible for, and often imagined threats of others. We should not allow any country to think that we are a threat to them,” he added.

During his address, Wickremesinghe also noted that Sri Lanka will become the first country in Asia that is preparing legislation for undersea cables.

In October, Wickremesinghe making a speech at the conference “The Indian Ocean: Defining our Future” stressed that “each littoral nation should commit in strengthening the mechanism based on common law in the Indian Ocean region”.

laid beneath the Indian Ocean should be secured. Situated in the middle of the Indian Ocean, Sri Lanka sees the need to start examining these issues in depth as much of the undersea cable connectivity between West and East travels over the seabed adjacent to Sri Lanka,” the President said.

“We want to ensure the freedom of digital connectivity not only as an Indian Ocean objective,

but as a global objective,” he added.