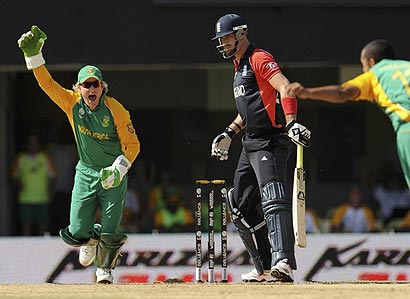 CHENNAI, India (AFP) – England’s star batsman Kevin Pietersen will miss the rest of the World Cup, with a team spokesman announcing Monday he would be returning home to undergo a hernia operation.

“Kevin Pietersen will return to the United Kingdom in the next 24 hours because of a hernia injury,” said the spokesman.

“England have applied to the ICC for Eoin Morgan to come as a replacement player.”

Pietersen, moved up the order to open during the World Cup, made just two off three balls during England’s Group B win over his native South Africa on Sunday, and it is now 27 one-day internationals since his last century.

Team officials said Saturday that Pietersen would undergo an operation, but only after the tournament, although the player did say the injury would “no doubt impact my preparation” during the World Cup.

However, the procedure has been brought forward after the 30-year-old was clearly troubled during Sunday’s six-run win at the Chidambaram Stadium where he looked more of a threat with his part-time off-spin than with the bat.

The batsman’s early departure from the World Cup raises questions over his future in the 50-over form of the game, with Pietersen having frequently complained about a crammed international schedule.

Advancing the surgery might enable Pietersen to appear in this year’s Indian Premier League. His original plan for a six-week course of treatment after the World Cup coincided with the lucrative event, which starts next month.

However, England would like their star batsman to be well-rested ahead of a busy home season of international cricket, featuring series against Sri Lanka and India.

The first Test against Sri Lanka starts in Cardiff on May 26.

At the weekend, Pietersen had said he hoped to make it through the World Cup, which finishes on April 2, despite the injury.

“I?m obviously extremely disappointed to have picked up this hernia injury but I?ve been able to manage it so far throughout the World Cup and will continue to do so under the guidance of the England team?s medical staff,” he had said in a statement.

“Representing England in a World Cup is something I’ve been looking forward to for the past four years and I’m excited by the prospect of helping the team achieve something special here on the sub-continent against the best teams in the world.”

Former Ireland batsman Morgan would have been in England’s original squad but for a finger injury. His replacement, Ravi Bopara, made a man-of-the-match winning 60 against South Africa in Chennai on Sunday.

However, both Morgan and Bopara are middle-order batsmen which leaves England needing to find a new opening partner for captain Andrew Strauss.

Either Jonathan Trott or Ian Bell could now be promoted up the order.

England’s victory over previously unbeaten group leaders South Africa revived a faltering World Cup campaign which has featured a stuttering win over the Netherlands, a tie with co-hosts India and a shock defeat by Ireland.

Their bid for a quarter-final spot continues with a group match against co-hosts Bangladesh in Chittagong on Friday.

Pietersen is the 14th player to be replaced at the World Cup.