Everybody Should Protect Environment for Well-being of All Beings – President 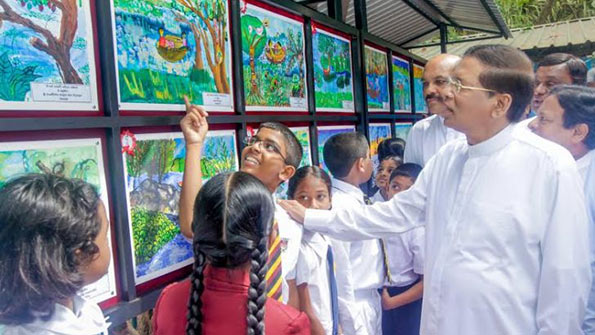 “All parties should get together to fulfill the responsibility to protect the environment for the well-being of all beings including humans”, says President Maithripala Sirisena.

He pointed out that in some cities of the industrial countries, people have to carry oxygen containers because their environment is polluted. “Nobody can neglect the timely responsibility to protect the environment”, he added.

The President made these remarks at the National Program to mark the World Wetland Day, held in Kakapalliya, Chilaw today (Feb. 02).The program has been organized under the theme of ‘Wetlands for our future: sustainable livelihoods’.

Speaking further, the President said that the attention of the entire world is now paid on the protection of natural resources including the wetlands. Pointing out that not only the United Nations Organization but also Non-Governmental Organizations has paid a comprehensive attention towards the environmental conservation, he added the current government is committed to protect the environment while preserving the great creations of the nature according to international charters as well as the policy of the government.

World Wetlands Day was first celebrated in 1997. Since then government agencies, non-government organisations and community groups have celebrated World Wetlands Day by undertaking actions to raise public awareness of wetland values and benefits and promote the conservation and wise use of wetlands. These activities include seminars, nature walks, and festivals, announcement of new Ramsar sites, newspaper articles, radio interviews and wetland rehabilitation.

President Sirisena watched the drawings of the winners of ‘Theth Bim Sithuwam (Drawings under the title of Wetlands) – 2016 island wide competition and presented the gifts to the winners.

The souvenir stamp issued to mark the World Wetland Day – 2016 was presented to the President by the Postmaster General of Sri Lanka at this occasion.

The third edition of the book ‘Theth Bim Asiriya (The Beauty of the Wetlands) was also presented to President Sirisena.

The President joined planting of Kadolana plants during this program.