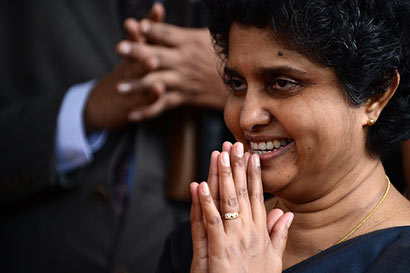 The Government has removed all obstacles for Chief Justice Dr. Shirani Bandaranayaka to hold her position as the 43rd Chief Justice of Sri Lanka, Bar Association President Upul Jayasuriya said. She has assumed duites and will retire from her post tomorrow, Jayasuriya added.

A government official who asked not to be named has told AFP that President Maithripala Sirisena had written to Bandaranayake to say her 2013 impeachment was unconstitutional and she should return to work.

The Bar Association of Sri Lanka, at a press conference held this morning, said there will be no defect in judgments delivered so far by CJ Peiris according to terms of Article 119 of the Constitution.

Attorney-at-Law J.C. Weliamuna told media the new Government and the President have taken up the position that the impeachment of the Bandaranayaka was illegal and not proper, because there was no ‘impeachment motion’ presented before the Parliament, under the terms of Article 172 of the Constitution.

“Therefore, the new Government does not recognize Mohan Peiris as the Chief justice. We all can expect the independence of judiciary in future with this move,” Weliamuna added.

“As you have witnessed, thousands of people are protesting against the continuation of the current CJ. We are eternally grateful for the Government and the President for considering this matter seriously,” he said.

This morning, the Bar Association of Sri Lanka (BASL) also staged a protest, in front of the Hulftsdorp Court complex, and called for the immediate resignation of Chief Justice Peiris.

The BASL has announced that its Executive Council has unanimously decided to re-elect impeached Dr. Shirani Bandaranayake for the post. The BASL alleged that Peiris was present at Temple Trees the night of Election Day (Jan 8) with several top officials and former President Mahinda Rajapaksa, when it has been alleged that a plot was hatched to keep the president in power by declaring a state of emergency.

2 Responses to Shirani assumes duties as CJ; will retire tomorrow