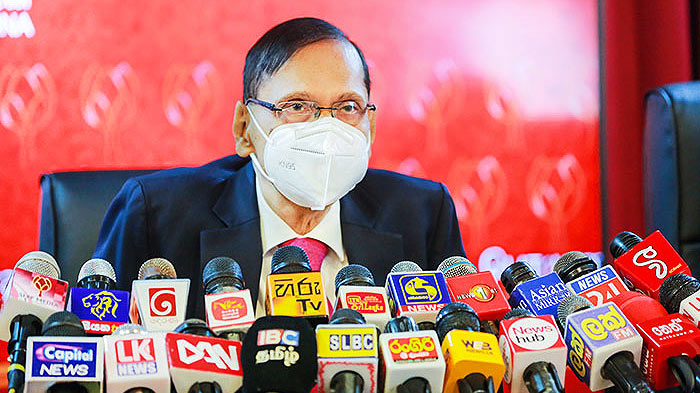 SLPP Chairman and Foreign Minister Prof. G.L. Peiris yesterday (18) emphasised that the worsening financial crisis experienced by the country was so acute the government wasn’t in a position to grant the salary increase sought by school principals and teachers.

Prof. Peiris, who served as the Education Minister till August this year said that the public realised the government lacked the wherewithal to meet the striking teachers’ demands. The academic said so at the weekly SLPP media briefing at the party office in Battaramulla.

Responding to media queries, Prof. Peiris stressed that the government expected the striking teachers to facilitate re-opening of schools on a staggered basis beginning Oct 21 (Thursday). The Minister indicated that striking unions shouldn’t expect to settle the salary issue on their terms as the government lacked the means even if it wanted to do so.

Referring to the rapid deterioration of public finances in the wake of Covid-19 eruption in early 2020, Prof. Peiris said that Budget 2022 was presented amidst an extremely difficult time.

The top SLPP spokesperson reiterated the government’s commitment to grant strikers’ demand in two stages as announced by Prime Minister Mahinda Rajapaksa at a meeting with striking unions at Temple Trees. Premier Rajapaksa on Oct 12 told a delegation of striking unions that the government would pay one third of the increase through the Budget 2022 and the remaining two in the following year’s budget.

The Premier’s Office quoted him as having told the delegates that the sharp drop in government income deprived the administration of an opportunity to grant the increase. Striking unions want the government to settle the issues immediately in one go.

Prof. Peiris appealed to those who have been on strike for 100 days to resume teaching. The student community really suffered due to the Covid 19 eruption and further delay in resuming studies would be catastrophic, Prof. Peiris said, underscoring the importance of restoring normalcy as about 300,000 would go to schools for the first time in their life.

Prof. Peiris said that schools that conduct classes from Grade 1 to 5 and those with less than 200 students would be re-opened on Oct 21. According to the minister, approximately 3,800 schools would be reopened as scheduled.