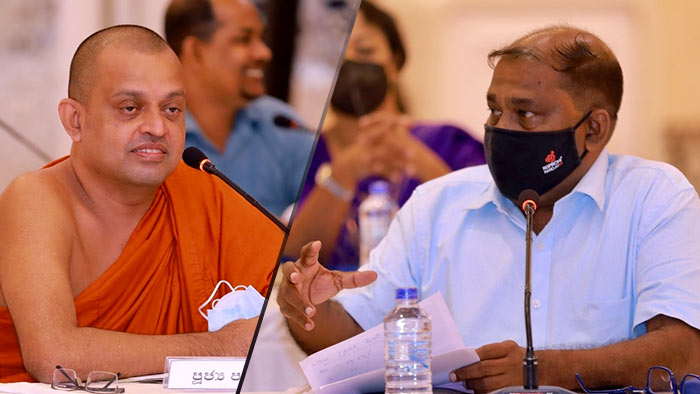 The teachers and principals, who have been on strike for more than three months, have split into groups that want to resume academic activities on 25 October and others that want to continue their trade union actions until they get a proper solution to the 24-year-old salary issue. Venerable Ulapane Sumangala Thera, Convener of the National Collective of Teachers and Principals, stated that their formal strike will continue after 21 October, when the Government plans to restart academic activities.

He said they will never, under any circumstances, create an environment conducive to resume academic activities in schools, and they challenged the Government to demonstrate how they are resuming academic activities. Meanwhile, Nimal Mudunkotuwa, Secretary of the Principal Graders Association, stated that they feel misled because several teachers’ unions associated with them had unexpectedly changed their views.

“Even after we resume teaching, we will continue to protest the 24-year-old wage inequality. This decision was made not under duress, but with our children in mind. Yesterday marked the 99th day since teachers and principals went on strike by withdrawing from online teaching activities in order to demand salary equity solutions. Governments compel us to take inequitable allowances like Rs 1,500. Teachers and principals will not report to schools on 21 and 22 October, when they open, however, we will report for duty on 25 October,” Stalin said.

He stated that they are more concerned about children than politicians, and that they are opposed to teachers being summoned to work whenever the Government chooses. However, the Education Ministry’s Additional Secretary L.M.D. Dharmasena stated that they are fine if teachers return to work next week, despite the fact that schools are opening this week. “This is a significant step forward for them, in our opinion.

They have made the decision to return to school as actual professionals. We worked hard with teachers who are likewise affected by the wage disparity. However, we are pleased that they took the initiative to negotiate their expectations and report to work, even if it is only next week,” he said. School teachers and principals in Sri Lanka were on strike for the 99th day on Monday, demanding that the Government fix long-standing pay inequalities between the two services.

The Government originally planned to increase their salaries over a four-year period, but after that proposal was rejected, the Government decided to grant the raise in two instalments. The unions, too, rejected this and continued the walkout, demanding that wages be increased immediately. Primary schools with a maximum capacity of 200 students in grades 1 to 5 will open on 21 October, with higher grades opening in three stages.