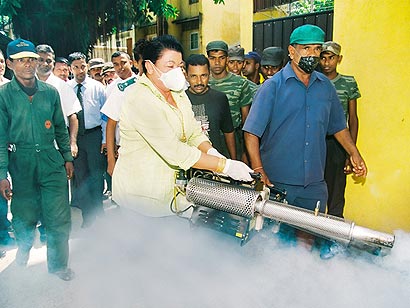 (Colombo Lankapuvath) Dengue is something we hear every day. This deadly menace has not yet been eradicated. According to a concept of First Lady Shiranthi Rajapaksa an islandwide Dengue Eradication Campaign under the “Carlton Suwa Udana” healthcare program aimed at enhancing the Standards of Health, nourishment and life skills of people was started in Colombo suburbs yesterday (01).

A five day programme on cleaning process including public awareness agendas and follow up action programmes will be implemented in the Western Province.

Along with that locally made BTI bacteria will be used from today island wide to control mosquito breeding grounds. This will be done with the sponsorship of the Health Department. The Minister of Health, Maithreepala Sirisena said that the initiation of using the bacteria is a victory of the people and it would protect people’s lives.

For the very first time the bacteria was sprayed yesterday (01) at State Engineering Corporation work site and the Health Minister Sirisena emphasized the fact that the Presidential Task Force will be set up to put into operation the National Dengue Control island wide. Successful results were achieved through this programme and almost all sectors, organizations and the public made a great effort.

The Medical Research Institute (MRI) will keep an eye on the site continuously and examine the reaction and impact of locally made BTI bacteria on dengue mosquito breeding. The MRI carried out all necessary testing.

The Health Minister, Sirisena thanked all who took part in producing the bacteria, State Engineering Corporation and the media for the support extended by them towards the dengue control program.

So far the total number of Dengue cases reported in the month of August is 3,054.