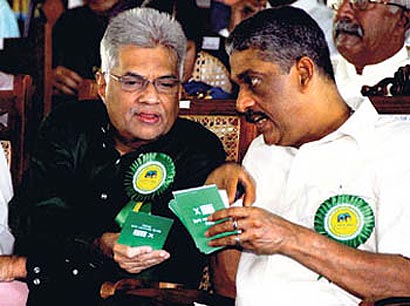 The issue of the breach of Parliamentary privilege of Democratic National Alliance (DNA) leader Sarath Fonseka came up in Parliament today as well. Opposition Leader Ranil Wickremesinghe has urged Speaker Chamal Rajapaksa to call for an explanation from the Army Commander regarding the matter.

United National Party (UNP) leader Ranil Wickremesinghe has reportedly told the Speaker to call for an explanation from Sri Lanka Army Commander Lt. General Jagath Jayasuriya as to why Sarath Fonseka who is under detention was not allowed to attend Parliament yesterday as well as today (Sept. 24).

UNP Colombo District Parliamentarian Sujeewa Senasinghe is reported to have stated that MP Sarath Fonseka should be permitted to attend Parliament first and that discussions regarding the possibilities or not should be discussed later.

Meanwhile, when Adaderana inquired from Director General of the Media Centre for National Security (MCNS) Lakshman Hulugalle regarding the issue, he said that since the verdict of the First Court Martial against Sarath Fonseka, his detention comes within the purview of the Prisons Department. Also, that since Mr. Fonseka was an elected MP, the Speaker had to take a decision on the matter of his attending Parliament, he said.

However Mr. Fonseka is being kept under detention at the Sri Lanka Navy Headquarters complex pending his application to the Court of Appeal against the verdict of the First Court Martial.