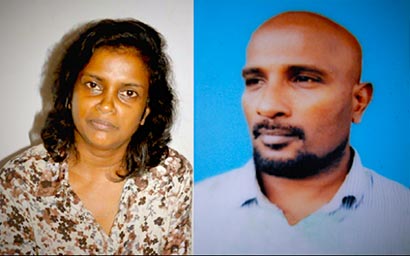 Gunaratnam is believed to have been abducted from his temporary residence at No.291/1, Gemunu Mawatha, Kiribathgoda, on April 6. He was last seen by a party member who dropped him at his residence in Kiribathgoda at around 5pm on April 6 following a party meeting. At around 11pm that day, Gunaratnam spoke to the same party member and asked to be picked up from his residence at 5am the following day (April 7). Gunaratnam has not been seen or heard from since.

The party member who arrived at Gunaratnam’s residence at around 4.30am the following day found that the air had been let out of all four tyres in Gunaratnam’s vehicle (NWKE 9457). On further examination he found that the door locks had been broken. Gunaratnam could not be found and was not contactable on his mobile phone. A neighbor had told police that 4 or 5 armed men had come to the house at around 4.30am on the morning of April 7 and instructed her to shut off lights and stay indoors. When she had looked out around 5.15am, she had seen nothing unusual.

According to party members, Gunaratnam’s mobile number (+94-71-3519722) was ringing till around 8am on April 7 but was not answered. The phone is currently disconnected or unreachable. The GPS coordinates of the mobile phone indicate that the phone was in the Thalawathugoda area on the morning of April 7. However there is no further evidence regarding his whereabouts.

Attygalle was last seen by Duminda Nagamuwa, a party leader who dropped her at the Kottawa bus stand at around 6pm on April 6. Attygalle had confirmed that she was going to her residence at 32/14/7, High level Road, Henawatte, Meegoda. However she did not answer her mobile phone (+94-77-0325567) the following morning though it had been ringing till about 11am. It has been confirmed that she had not arrived home on April 6.

On April 7, Ajith Kumara, a member of parliament; Gunaratnam’s sister-in-law, Dr. Nandani Somaratne; and Duminda Nagamuwa have filed police complaints regarding the disappearances.

The Australian High Commission in Colombo has been informed of the disappearance as Gunaratnam is an Australian citizen. A police spokesperson told the media that neither of the two had been taken in for questioning or been arrested by the police.

Party members however had received credible information that Gunaratnam was under intense surveillance by the government. As a safety precaution Gunaratnam and Attygalle always informed party members of their whereabouts and never switched off their mobile phones.

FSP members believe that Gunaratnam and Attygalle have been abducted by forces linked with the government since the party has campaigned actively against human rights abuses by the government, particularly against the Tamil minority in the North.