Former Speaker Lokubandara is new Governor of the Sabaragamuwa Province. 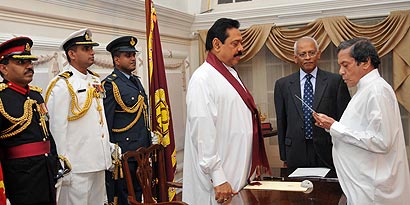 Former Speaker of the parliament W.J.M.Lokubandara was sworn in as the new Governor of the Sabaragamuwa Province before President Mahinda Rajapaksa at Temple Trees this afternoon on 21 April. Mr Lokubandara who was elected to the parliament in UNP ticket in the previous general election pledged his support to the UPFA candidate President Mahinda Rajapaksa in the Presidential election in January early this year.

Later Mr Lokubandara’s son was appointed as the SLFP organiser in Haputale constituency in Badulla District by President Rajapaksa. Appointment letters were handed over to Lokubandara junior at his wedding day by the President as a gift. In the last general election he was elected to the parliament from the United People’s Freedom Alliance (UPFA) and in the mean time W.J.M. Lokubandara’s name was included in the UPFA National list. However his name was opted out from the nominated National list MPs this morning for the next parliament which is due to resume tomorrow. Subsequently Mr Lokubandara, a senior UNP member was appointed as the new Governor of the Sabaragamuwa and President Rajapaksa handed over his papers at Temple Trees. Secretary to the President Mr Lalith Weeratunga is also seen here at the ceremony. 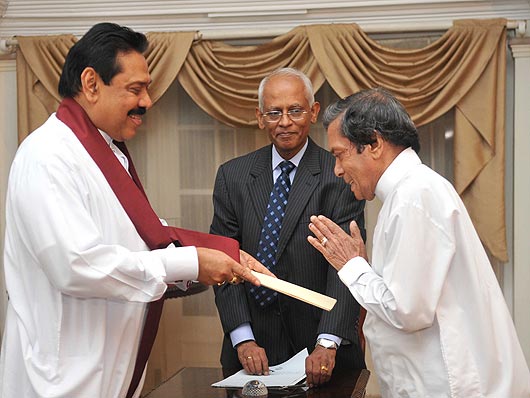