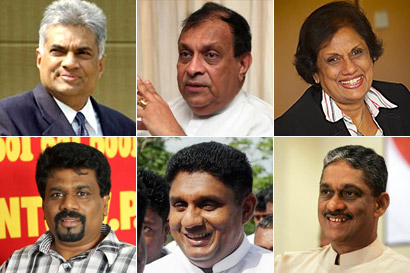 The Common Candidate Search Group all agree for the need for a Common Candidate but for months on now they are in a twist who to choose. As for the voters of Sri Lanka, what is important when casting their vote is to realize how far they want change, what that change is likely to result for the country and whether any reversal of the gains are likely to result in bringing about that change. It becomes all the more important that our choice of leader for Sri Lanka needs to be looked more upon the ability to protect Sri Lanka from the global sharks than simply wearing the crown of President of Sri Lanka. The contenders all of whom had held leadership roles in the past it is good to look back and take cognisance of how far they have actually protected and guarded the sovereignty and territorial integrity of Sri Lanka. If they have not they do not deserve any place in re-contesting to repeat their felonies.

Gambling with the prospects of

Gambling with the prospects of

Anura Kumara Dissanayake – able to drag Sri Lanka into stoneage. Lets also remember that all the people they killed were Sinhala Buddhists and not a single LTTE terrorist!

Sarath Fonseka – Revenge mantra will lead to doom but people like to hear some ‘kalawedda’ stories!

Sajith Premadasa – All Talk No Action

Sobitha thero – Referred to as Mr. by some and that says it all! The thero promises he will hold forte for 6 months if elected and then abolish the Executive Presidency …. Similar story was told by that trishaw driver to Sirisena Cooray at the Municipality Elections but refused to step down thereafter!

Karu – A Journalist claimed he was bribed Rs.50,000 per month for publicity! Not a good start for a Common Candidate

The common candidate confusion cannot erase and in fact has raised people’s doubts of how the country can be led when the parties vying to select a common candidate have yet to select one and they have been on the job for quite some time now. Just imagine how decisions may be taken after their Common Candidate gets elected and the disagreements likely to arise given the ideological and other political agendas each of the common candidate group are all aligned to. How many promises and pledges must be taking place for the support of each group, what are their demands to canvass their people for votes, will the common candidate President be able to give in to all these demands and will he/she actually honor these demands or will all this end up in further chaos for the nation – these are factors that Sri Lanka’s voters be they Sinhalese, Tamil Muslim, Burgher, Buddhist, Hindu, Christian/Catholic, Islam or atheists and agnostics will need to think about BEFORE they cast their vote!

While the common candidate group are busy selecting a candidate it is good for voters to think about their selection too and most of all imagine what Sri Lanka is likely to be like if their choice of common candidate wins and he/she can’t or won’t honor the promises made to appear as common candidate.

It is also a good time for the general public too to realize that each of us individually have a greater role to play and are ourselves accountable by our actions for taking the country forward or backwards – the blame cannot always be placed on the doorstep of the politicians.

“A Leader is one who knows the way, goes the way and has shown the way’.

“Aspirants for that role are those who don’t know the way, have gone the wrong way and can’t show the way”.