Give another chance to the people – Anura Kumara 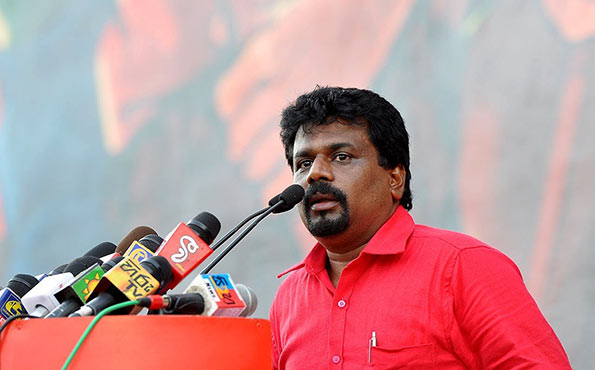 JVP leader Anura Kumara Dissanayake today urged President Maithripala Sirisena to dissolve parliament soon and give another chance for the people to elect suitable parliamentarians, while requesting the president not to listen to those who opposed him earlier including present Opposition Leader Nimal Siripala.

Addressing the mammoth crowd at the JVP May Day rally at the BRC grounds the JVP Leader accused the coalition government of displaying their inability to govern a country as a coalition. He also said that the enactment of the 19th Amendment to the Constitution was a historical victory for Sri Lankans but the President had to offer ministerial posts as bribes to parliamentarians to get their votes in favour. “The Hyde Park Grounds where the SLFP May Day rally is being held was not used even for small meetings of the JVP. It shows how the people have been disappointed over the other political parties”, Mr. Dissanayake said.

JVP General Secretary Tilvin Silva told the crowd that the ongoing political situation in the country, has proved that the JVP was the only political party which could be trusted by the people.

“Today, people are holding May Day rallies without knowing the real meaning of this day. They misuse May Day to fulfil their personal agendas. Some try to elect former President Mahinda Rajapaksa who defrauded state money with the support of his family members. They never stood for the working class,” Mr. Silva alleged.

The JVP also accused parliamentarians including Vasudewa Nanayakkara and Dinesh Gunawardene of working hard to get the former president back to active politics, describing them as politically displaced characters. The Red May demonstration of the JVP commenced its march from S. de S Jayasinghe Grounds in Dehiwela and reached B.R.C. grounds with a big crowd representing all Ceylon Trade Unions of Farmers’, Fishermen’s, Women’s, Youths, Students and Artistes.

1 Response to Give another chance to the people – Anura Kumara

Home » Give another chance to the people – Anura Kumara