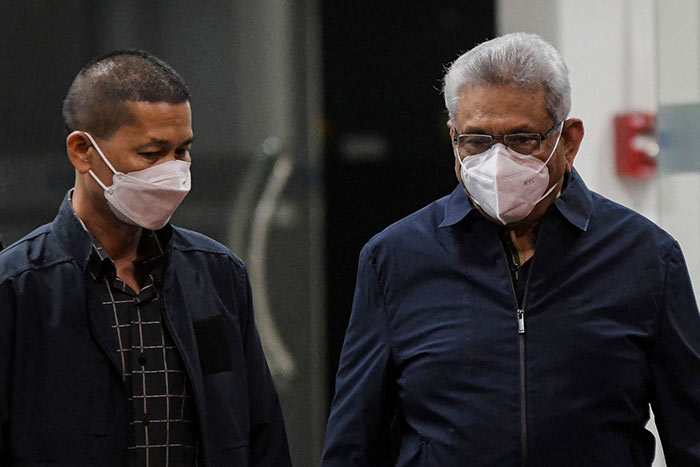 Former Sri Lankan President Gotabaya Rajapaksa is staying at a hotel in Bangkok in the heart of Thailand’s capital, where police have advised the ousted Sri Lankan president to remain indoors for security reasons, according to a media report on Friday (August 12).

Rajapaksa arrived in Thailand with three other people on a chartered flight from Singapore at Wing 6 of the military airport adjacent to Don Mueang International Airport around 8 pm local time on Thursday.

The group had planned to land in Phuket but concerns about a possible information leak resulted in the flight being redirected to the military airport in Bangkok, the Bangkok Post newspaper reported, citing a source.

At the hotel, the location of which was not disclosed, plainclothes police officers from the Special Branch Bureau have been deployed to ensure safety of Rajapaksa. Officials have asked the embattled former Sri Lankan president to remain within the hotel during his stay in the country, the report said.

Rajapaksa arrived in Bangkok on the same day that his visa in Singapore expired. He arrived here for a temporary stay before seeking permanent asylum in another country.

Prime Minister Prayut Chan-o-cha on Wednesday confirmed a temporary visit to Thailand by the 73-year-old Sri Lankan leader for humanitarian reasons, and said he promised not to conduct political activities in the kingdom during his search for permanent asylum in another country.

After fleeing to the Maldives on July 13, Rajapaksa then flew to Singapore, where he announced his resignation a day later after months of protests over Sri Lanka’s unprecedented economic crisis.