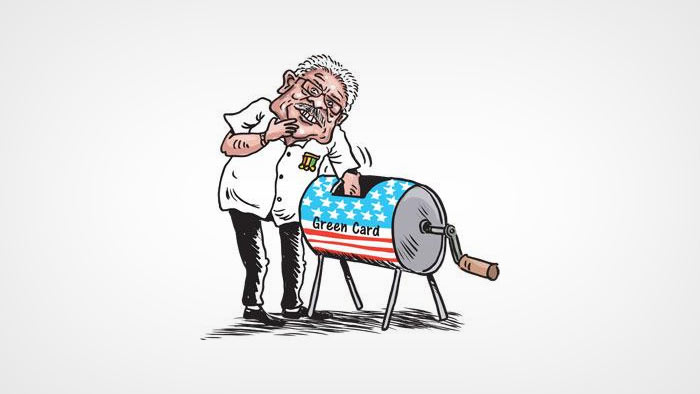 Former Sri Lankan President Gotabaya Rajapaksa who fled the country last month amidst public protests calling for his resignation, is awaiting to obtain a US Green Card to return back to the United States and settle there with his wife and son.

Highly placed sources said that Rajapaksa’s lawyers in the United States had already begun the procedure last month for his application to obtain the Green Card as he was eligible to apply due to his wife Ioma Rajapaksa being a US citizen.

The procedure will also now involve his lawyers in Colombo submitting the additional documents here in order to go ahead with the procedure.

The former President who is presently in a hotel in Thailand along with his wife will return back to Sri Lanka on Aug. 25, cancelling his initial plan to remain in Thailand at least till November.

Sources said that two days ago, Rajapaksa had consulted his lawyers and had decided to return back to Sri Lanka later this month as he was not allowed the freedom to move in Thailand as initially expected, due to security concerns.

Upon his arrival in Bangkok, Thai police had advised the ousted President to remain indoors for security reasons.

Foreign Media reports said that at the hotel, the location of which has not been disclosed, plainclothes police officers from the Special Branch Bureau had been deployed to ensure the safety of Rajapaksa. Officials had asked the former Sri Lankan president to remain within the hotel during his stay in the country.

Upon his arrival back to Sri Lanka this month, the cabinet will discuss on providing Rajapaksa a state house and security accorded to a former President.

Rajapaksa fled for Maldives last month and thereafter to Singapore. He entered Singapore on a medical visa and had it extended twice to remain there as much as possible. As his visa could not be extended further, Rajapaksa and his wife left for Thailand and was assured he could remain there till he finalised his third destination.

However with his movements now restricted in Thailand, he will return back to the country.