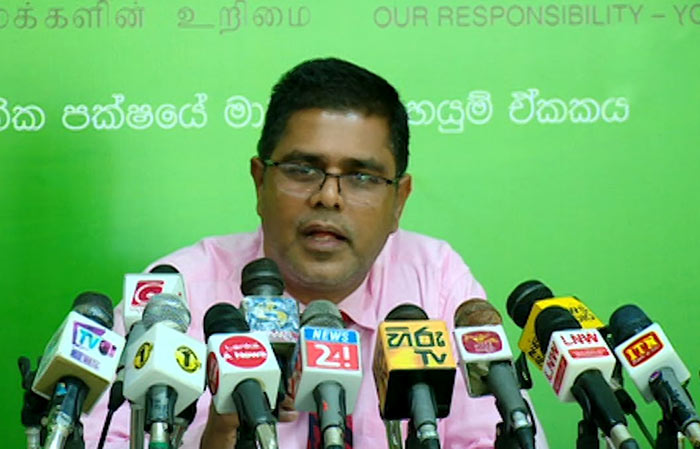 UNP MP Mujibur Rahman, yesterday (12), said President Gotabaya Rajapaksa’s government was in a far bigger crisis than the UNP though the media remained focused on the Opposition.

Colombo District MP Rahman claimed that there were several influential factions within the government trying to consolidate their positions in the run-up to the parliamentary polls expected in late April 2020.

Referring to post-presidential poll role played by Viyath Maga, one of those civil society groups that campaigned for Gotabaya Rajapaksa, the UNPer said that a major showdown among various factions was inevitable.

Rahman said so at a media briefing called by the UNP at Sirikotha.

Pointing out that nearly seven million people had voted for the Sri Lanka Podujana Peramuna (SLPP) candidate Gotabaya Rajapaksa at the 16 Nov. poll, MP Rahman alleged the President was yet to start implementing those promises in his much publicised manifesto.

Instead, the government was busy hunting key UNP members, MP Rahman alleged. The UNPer alleged resumption of investigations into an alleged hit and run accident in 2016 involving the then Minister Patali Champika Ranawaka, probe on the then Minister Dr. Rajitha Senaratne over accusations regarding alleged abductions and killings and causing media furore over phone scandal caused by MP Ranjan Ramanayake.

Lawmaker Rahman said that public attention couldn’t be diverted away from the crisis in the government by President Gotabaya Rajapaksa carrying out sudden inspections.

Asked by The Island whether continuing leadership tussle in the wake of devastating presidential poll defeat two months ago had deprived the UNP of an opportunity to exploit the crisis within the government, UNPer Rahman said he accepted that assertion. The MP said that they were confident the matter could be resolved by Thursday, January 16. However, the government was experiencing a much more difficult situation than the UNP due to various factions struggling to consolidate their positions. The UNPer discussed as to how the SLFP could find it in an extremely difficult situation for want of a fair electoral pact with the SLPP.

Lawmaker Rahman said that the SLFP was unlikely to receive more than one nomination for each electoral district.

Referring to a public statement by Sri Lanka Ports Authority Chairman (SLPA) Gen. Daya Ratnayake in Colombo over the weekend, lawmaker Rahman said that the former Army Chief urged the electorate not to send those who had studied up to Grade 8 to parliament. The UNPer said that the General owed an explanation as to whom he was referring to. Was he referring to someone among their parliamentary group, MP Rahman asked,

MP Rahman alleged that thanks to the new government the country was now on a reverse gear.

The UNPer claimed that Viyath Maga was seeking to secure a position within the parliamentary group at the forthcoming parliamentary poll. Those close to President Gotabaya Rajapaksa were being promoted as candidates at the next countrywide poll, MP Rahman said, alleging that contrary to promises the new administration accommodated relatives in state institutions.

The media sought an explanation from MP Rahman as to why the party organized two simultaneous media briefings today, January 12, at Sirikotha and the Opposition Leader’s Office. Asked whether such actions reflected the widening rift between the two factions, MP Rahman said that they reached consensus on the arrangement. The MP said that there was no harm in having two media briefings, at the same time, as both promoted the party.