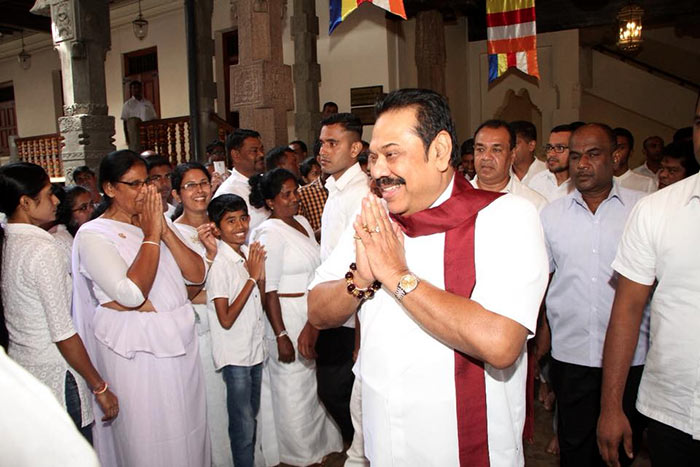 Former president Mahinda Rajapaksa yesterday compared the government to a plough being drawn by a bull and a buffalo.

He said this after paying homage at the Dalada Maligawa and underlined the fact that this government would be defeated because it had not solved any of the issues faced by the people and had no proper plan of development.

“This government is similar to a plough being drawn by a bull and a buffalo. They pull in different directions. It is unable to control underworld activities not only in Colombo but also in Kandy,” he said. “The Kirivehera prelate was shot. They can find out who shot him by asking the prelate, who is said to be recovering. Someone may have had a reason to kill him. The social media is coming out with various fabricated news and are falsely accusing Gotabaya Rajapaksa of having committed various crimes.”

Mr. Rajapaksa said religious leaders were also being side-lined by this government.

“The Vesak Poya Day was changed, New Year was changed, and even the Poson Poya has been changed. There is even an issue about the Ramadhan festival. All religions have been ill treated,” he said and added that usually matters discussed between a foreign ambassador and a state official were not normally released, but it had happened with various interpretations.

Mr. Rajapaksa said a presidential candidate would be named at the correct time, just like President Sirisena who came into the fray quite suddenly.

“The presidential candidate will be named under my directions,” he said.

4 Responses to Government like a bull and buffalo-drawn plough: MR

Home » Government like a bull and buffalo-drawn plough: MR