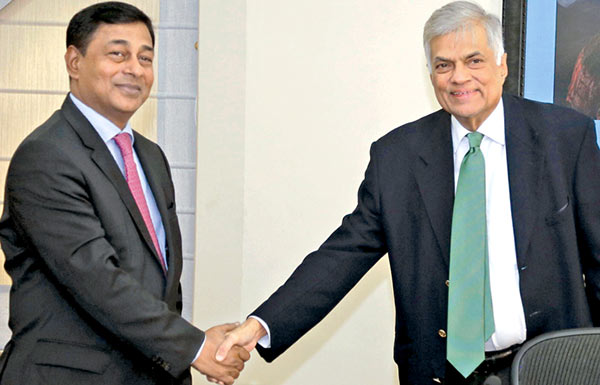 Proper economic management policies adopted by the government have enabled the country to overcome the debilitating effects of the unfavourable climatic conditions experienced in recent times. If not for the government led by President Maithripala Sirisena, the country would never have been able to overcome the economic difficulties caused by the adverse weather conditions, Prime Minister Ranil Wickremesinghe said.

The Prime Minister made this observation addressing a meeting which followed the opening of the new building of the Sri Lanka Bureau of Foreign Employment at Ratnapura new town on December 16.

The Prime Minister said the country’s economy was in shambles when the government led by President Maithripala Sirisena assumed power in 2015. The national income was woefully inadequate to service the colossal amount of foreign loans obtained by the previous regime. But proper economic management policies adopted by the government had enabled the country to settle the problem relating to debt servicing.

Wickremesinghe said prices of essential food items had escalated due to a shortfall in local production caused by the inclement weather conditions experienced last year and early this year. Taking this into cognizance the government had decided to provide a relief package of 8 essential food items including rice, sugar, sprats, canned fish, potatoes and big onions at a fair and affordable price through Sathosa outlets and the private sector shops and trading establishments. These items would reach the people at grass roots level within the coming fortnight.

The Prime Minister said the country was expected to achieve an economic growth rate of 5.5 percent to 6 percent this year. Although the industrial and service sectors had shown much progress, the agriculture sector had been affected due to adverse weather conditions. The agriculture sector therefore, recorded a growth rate of minus 1.2 percent. This had resulted in the reduction of the overall growth rate to 4 to 4.2 percent.

The Prime Minister said the climatic conditions that would prevail next year cannot be predicted. As such, the Disaster Management Minister had suggested that we should lay more emphasis on the development of industrial and service sectors to overcome any shortfall caused by the agriculture sector. The industrial sector would be developed by setting up new factories from Hambantota up to Kandy. The Embilipitiya area would also become an industrial zone in the near future as he emphasised to Ministers John Amaratunge and Thalatha Athukorale during a recent discussion.

The Prime Minister said steps had been taken to develop industrial zones in Kurunegala and Kalutara districts. Much progress was also expected in the service and tourism sectors. It was hoped to reduce the price of Aviation fuel supplied to Aircrafts serviced in Sri Lanka, in order to attract more tourist groups to the country.

The government has also planned to set up tea factories fed by solar energy. This would help to maintain tea factories with a lesser workforce.

The Prime Minister said the new SLBFE office opened at Ratnapura new town would provide a proper training to people seeking foreign employment. Foreign job seekers would be able to increase their per capita income by obtaining the NVQ certificate from this centre. Countries such as the Philippines implemented foreign employment programmes with the objective of increasing per capita income. Sri Lanka too would pursue this objective during the coming years.

The Prime Minister said the dedicated efforts made by Minister Thalatha Athukorale had helped to bring benefits and development to the Ratnapura district.

The contribution made in this regard by Minister W. D. J. Seneviratne should also be highly appreciated.

The government had decided to request proposals from companies named for the Ratnapura Express way projects. A final decision on this matter would reach the Cabinet for approval early next year. Work on the project would commence thereafter. Funding the first stage of this project up to Ingiriya would not be a problem, the Prime Minister said.