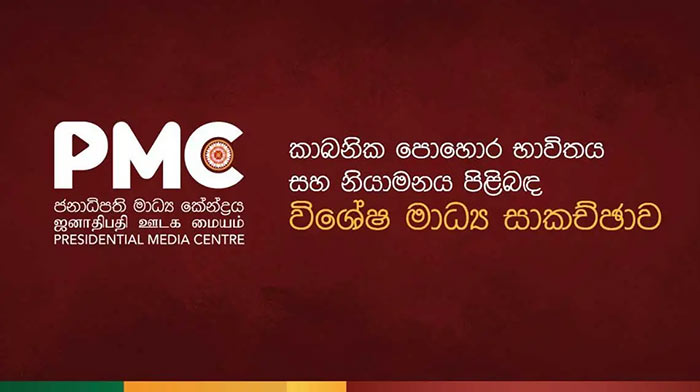 The government says that a mechanism has been formulated to provide the organic fertilizer required for the Maha Season to the farmers without any shortage.

Accordingly, the Government Officials of the respective line institutions say the entire process including farmer awareness, technical assistance and financial assistance is being continued uninterrupted.

This was revealed at the media briefing held at the Presidential Media Centre today (02) via video conference.

The weekly media briefing of the Presidential Media Centre was held via Webex App due to the COVID-19 pandemic and today’s topic was ‘The Use of Organic Fertilizer and Regulation.’

The key government officials in the field and the representatives of all electronic and print media institutions joined the briefing.

Though the government has taken steps to manufacture local organic fertilizer, achieving the goal to manufacture the fertilizer quantity required for the farmers was hampered due to the current situation.

Accordingly, it was revealed that arrangements have been made to import organic fertilizer of high international standard to address any shortage and also use bio-pesticides that are covered by the Pesticides Act.

The full approval of the Fertilizer Advisory Committee has been granted for this. The officials also ensured that these organic fertilizers will be made available to the farmers after subjecting them to laboratory and biodiversity research and testing.

Financial incentives of Rs. 12,500 per hectare up to a maximum of two hectares will be provided to farmers to encourage organic fertilizer production. Applications have already been issued for this and the officials said the completed application forms can be submitted to the Agricultural Research and Production Assistants or the Agrarian Service Centers.

The money will be credited to the personal account of the relevant farmers and plans have been made to provide financial assistance to the farmers who do not have bank accounts, under a special scheme. It was also stated that farmers who do not have the facilities to produce organic fertilizer have the opportunity to obtain organic fertilizer from other parties and the money will be reimbursed to them.

The ‘1920’ hotline provides solutions to farmers’ problems and a team of technical officers covering all districts have been prepared for field inspections.

Responding to the questions, the public officials pointed out that a total cost of Rs. 26.62 billion will be spent for the entire process including the required fertilizers for the Maha Season, local production, imports, subsidies, technical assistance and awareness.

They also said that with this initiative, a considerable amount out of the Rs. 22.71 billion spent on the importation of chemical fertilizers will remain with the farmers in our country.

With the use of organic fertilizer, the country has developed a young entrepreneurship. The state banks are already in the process of granting them loans up to one million rupees at a concessionary interest rate, while low income earners will be provided with necessary machinery at a concessionary price, officials pointed out.

The Government officials assured that the farmers would never be isolated at any cost and further stressed that there would be no food shortage or famine risk in the country as a result of the organic fertilizer policy, as claimed by some media and various groups.